NORTHERN Tablelands MP Adam Marshall has declared competition tennis will return to Mungindi, announcing a $208,780 grant from the State Government for the replacement of two of the town’s dilapidated courts.

The news follows a $140,715 upgrade of sports facilities in the border community in the last 12 months, which included upgrading one of the existing courts for use as a joint tennis and netball surface.

“Tennis has always been a big part of social life in the country, with almost every rural community having courts which brings people together,” Mr Marshall said.

“Until last year, Mungindi’s six courts were virtually all unplayable with the concrete surfaces cracked, uneven and with grass growing up through them.

“To ensure the Mungindi Tennis Club can continue into the future a large concrete slab will be put down over two of the existing courts, creating two brand new playing surfaces.

“The slab will be dual purpose with lines painted to allow both tennis and netball to be played. 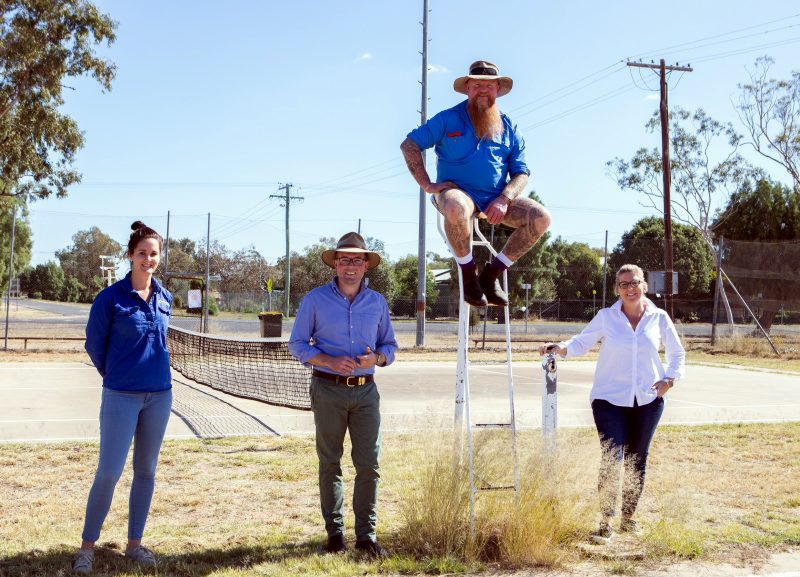 “The first port of call will be for Council to meet with its partners, the Mungindi Progress Association and user groups to confirm the project aligns with community expectations. Thereafter, the procurement process will kick off.

“It is hoped that this will get underway early in the new financial year.”

Mungindi Progress Association President Anna Harrison said in the past the tennis courts had been a well-used community asset.

“Wednesday night tennis is something many locals look forward to, with between 20 and 30 people having a hit under the lights,” Mrs Harrison said.

“Unfortunately, the courts in their current state have become unsafe, but this upgrade will mean the community will have three high quality courts which can be enjoyed day and night.

“In our little community there are not many opportunities for social sport so getting the courts back up to a playable standard will improve community spirit, by giving farming families the opportunity to come into town mid-week, catch up with their friends and be physically active.

“We also have a lot of children in the area who are interested in playing tennis, so it will be great to be able to again have facilities which support junior competitions.

“Stage 3 of this project will be to seek funding for a new fence around the perimeter of the courts which will improve the overall look of the facility while also making it even safer for players.”

Next post
$203 million Newell Highway upgrade near Boggabilla powering along