This group of artists worked tirelessly – in a tag-team sort of way – since mid-2015 to create Sunday Afternoon along the Mehi, which will soon adorn the walls of Fairview’s Perry James Lodge Dining Room. 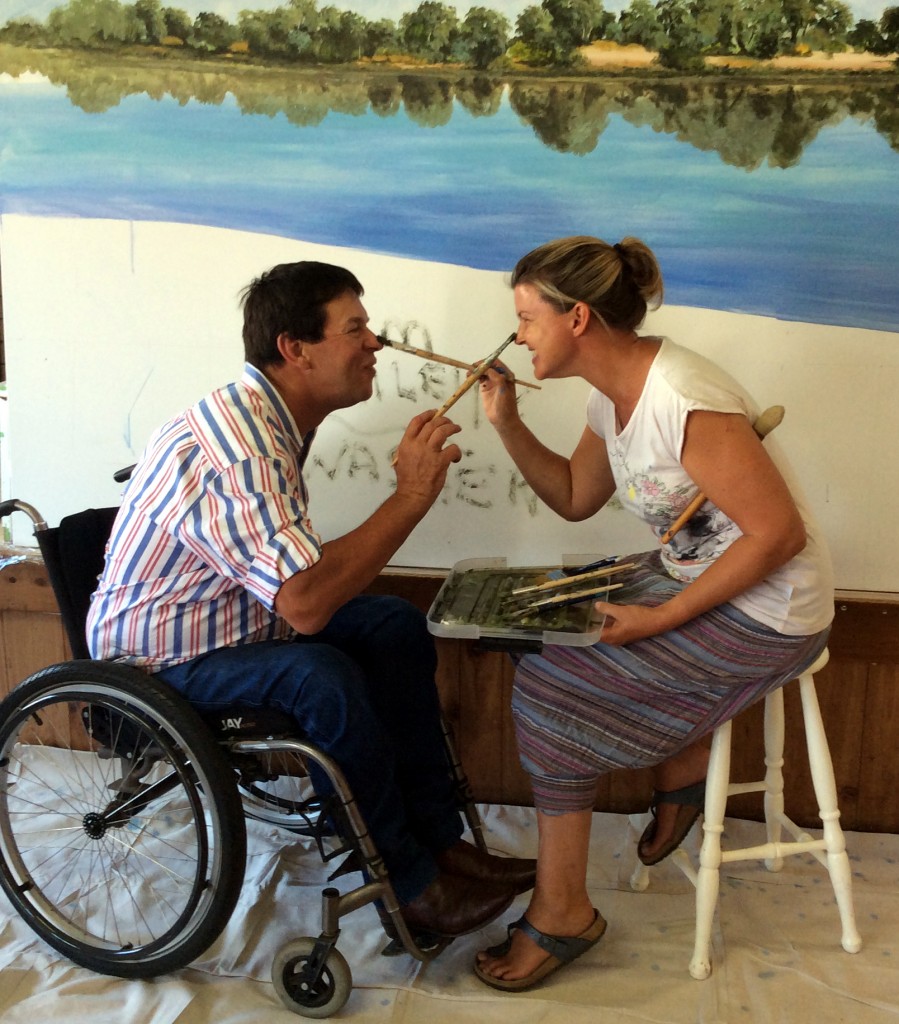 Artist Belinda Williams and Sam Bailey, who popped in to the Masonic Hall to add “Sam Bailey was here” to Sunday Afternoon along the Mehi. The finished painting will be officially unveiled on Thursday, March 16 (Image supplied).

A couple of years ago project co-ordinator Bette Montgomery was part of a group that was redecorating the old Perry James Lodge – the original part of Fairview.

She says proudly that Sunday Afternoon along the Mehi has “been a wonderful ride.”

“We were working on the dining room, which is a lovely, big room with plenty of light. We’d gotten new blinds and new furniture and floor coverings but there was one big, long, blank wall,” Mrs Montgomery said.

“I suggested that we see if could buy a painting but anything that we thought we could afford turned out to be way, way more than we could possibly pay.

Undaunted, Mrs Montgomery went in search of local artists who just might have been willing to help out.

It didn’t take long to find the right people – the first nine artists Mrs Montgomery approached all agreed to put brush to palette.

“There are heaps of others who could’ve and would’ve liked to be a part of it, but it just happened that the first nine people I asked all said ‘yes’ . . .  we were very lucky,” Mrs Montgomery said.

The huge landscape is a collaborative work done in stages by members of the group who called by when time and travel allowed.

There were others also, who simply “popped in”, to give a hand.

“We raised some money to purchase the equipment needed, and there were a lot of people who helped with that,” Mrs Montgomery said.

“Annette Jones, who has just left the Fairview board, had a big fundraising day and got us started and Sandra O’Mullane and some of her friends all kicked in and raised money towards it.

“BATS, the Boomi crew who always give out money for local projects, gave us about $1300 and the fundraising was topped up with a public donation from Moree Plains Shire Council,” she said.

Mrs Montgomery has nothing but praise for this diverse group of artists who gave countless days and rich talent to produce such a project.

“They have all been just so generous about it, and all for the good of Fairview,” Mrs Montgomery said.

The biggest hurdle to overcome was finding the right “studio” to work on a painting of such massive proportions.

“We needed a big space because it’s a giant painting and we had to have somewhere that we could leave it,” Mrs Montgomery said.

“We knew in the beginning that it could take up to two years and (mayor) Katrina Humphries suggested the Masonic Hall.

“We approached the Masons and they have been absolutely incredible from the very start.

“We have nothing but the highest praise for all the members of Lodge Courallie, who have let us into their hall,” she said.

“The space was just perfect. It was air-conditioned, there was plenty of light and we had access to all the amenities.

“The painting was always safe, the Masons looked after it, and their secretary, Warren Fanning, let the painters in and out whenever they needed to work on the painting.

“This is a perfect example of the way in which Moree can pull together to do something really good for people who need it.

“It’s been a wonderful ride and watching these beautiful artists work has been amazing – I’ve just loved every minute of it,” she said.

The official unveiling of Sunday Afternoon along the Mehi will take place at Fairview’s Perry James Lodge Dining Room at 2.30pm on Thursday, March 16.

(Watch this space for a follow-up story to the official unveiling of Sunday Afternoon along the Mehi. It will appear on this website soon).

ALSO IN THE NEWS