The NRMA Kennedy Awards for Excellence in Journalism is delighted to announce that ClubsNSW will sponsor the prestigious Kennedy Award for Lifetime Achievement, which will be presented at this year’s gala event on 12 August.

The Kennedy Award for Lifetime Achievement recognises media professionals who have devoted their working life to fearlessly pursuing fact and the truth while upholding the highest of standards in Australia’s toughest and most competitive media market.

The inaugural recipient of the award in 2013 was veteran newspaper and television reporter, Harry Potter, who was acknowledged by fellow veteran crime reporter and author, Norm Lipson.

In 2014, Celina Edmonds, SKY NEWS’ National Affairs Correspondent and anchor of its NewsDay program, officiated when author and newspaper legend, Philip Cornford, was honoured while last year veteran sport and rugby league journalist and author Ian Heads was presented with the award. 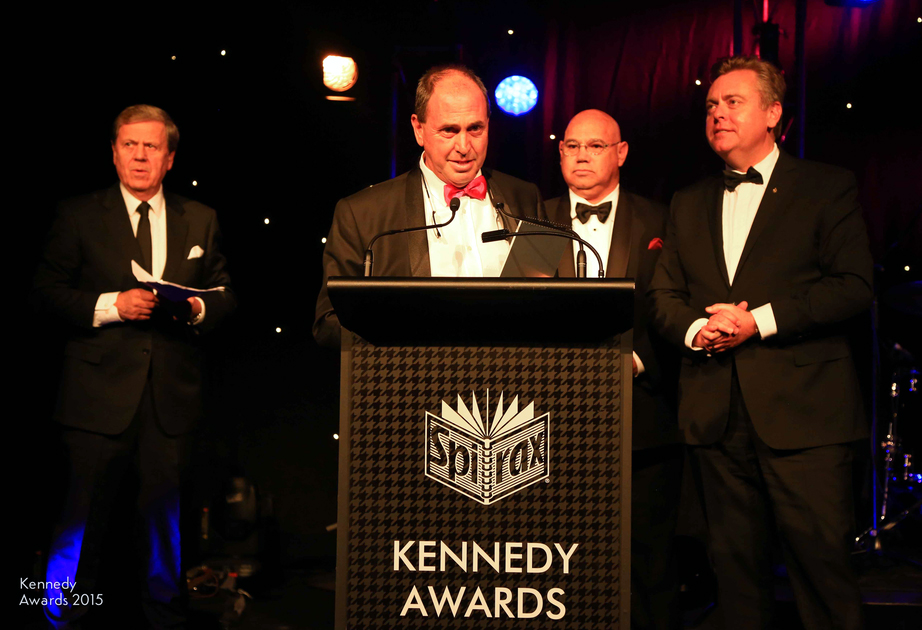 Announcing ClubNSW’s sponsorship of the Award for Lifetime Achievement, Kennedy Foundation chairman, Peter Kogoy, thanked the organisation for its support and commitment to the awards.

“The Kennedy Foundation and Kennedy Awards is delighted to have ClubsNSW as a partner and sponsor of the Award for Lifetime Achievement, one of the most prestigious awards at the annual gala awards’ night in August every year,” Mr Kogoy said.

“The inaugural award in 2013 honoured veteran Ten Network and News Ltd journalist, Harry Potter, and it is great news indeed that ClubsNSW is now sponsor of the fourth award in 2016.

“The Award for Lifetime Achievement is made to media representatives who have devoted their entire professional life to pursuing excellence in their craft without fear or favour while at the same time observing the highest standards of integrity.

ClubsNSW Chairman Peter Newell said that it was important to celebrate the hard work, talent and goodwill of the state’s media professionals.

“It’s an honour to be part of The Kennedy Awards for 2016. We look forward to playing our part in celebrating the many achievements and strong commitment of our media professionals who deliver quality journalism to all of us, each and every day,” Mr Newell said.

ClubsNSW CEO Anthony Ball said that coming on board as a sponsor for this year’s Kennedy Award for Lifetime Achievement was a fantastic opportunity to honour industry legends and greats.

“The Kennedy Awards showcase the best in the news business, and with our sponsorship of this Award we are making a commitment to recognising and celebrating quality and excellence in NSW journalism.”

The NRMA Kennedy Awards, named in honour of legendary Sydney crime reporter Les Kennedy who died aged 53 years in 2011, continue to recognise the country’s finest media professionals and those who have put so much back into the industry.

“With the ongoing generous support of all our loyal sponsors and partners like ClubsNSW, the Kennedy Awards continue to remain a prestigious annual event, worthy of the great legacy left by the late Les Kennedy,” Mr Kogoy said.

The 2016 NRMA Kennedy Awards will be held on 12 August at the Australian Turf Club’s Grand Ballroom, Royal Randwick.

The Kennedy Awards continues to provide ongoing support to the Kennedy Foundation which administers a benevolent fund for media professionals facing hardship, as well as other charitable organisations like the children’s cancer charity Redkite, the Aboriginal  Medical Service, the Charlie Perkins Trust for Children and Young People, leading Australian Cancer Clinical Trials Group, ANZUP, and its flagship event the Below the Belt Pedalthon and the Aboriginal School of Learning at the University of Technology Sydney.