MEMBER for Northern Tablelands Adam Marshall has welcomed a new campaign encouraging the community to help police stamp out the supply and use of the drug ice, starting this weekend.

Mr Marshall said he applauded the ‘Your call can make a difference’ campaign prompting the public to report suspicious behaviour to Crime Stoppers.

“Ice has a horrific impact on the social fabric of communities across the State, and our region is far from exempt from its force,” Mr Marshall said.

“This new campaign will include advertisements in newspapers, magazines and throughout social media and I encourage the community to share with their networks and spread the message – a phone call can make a big difference. 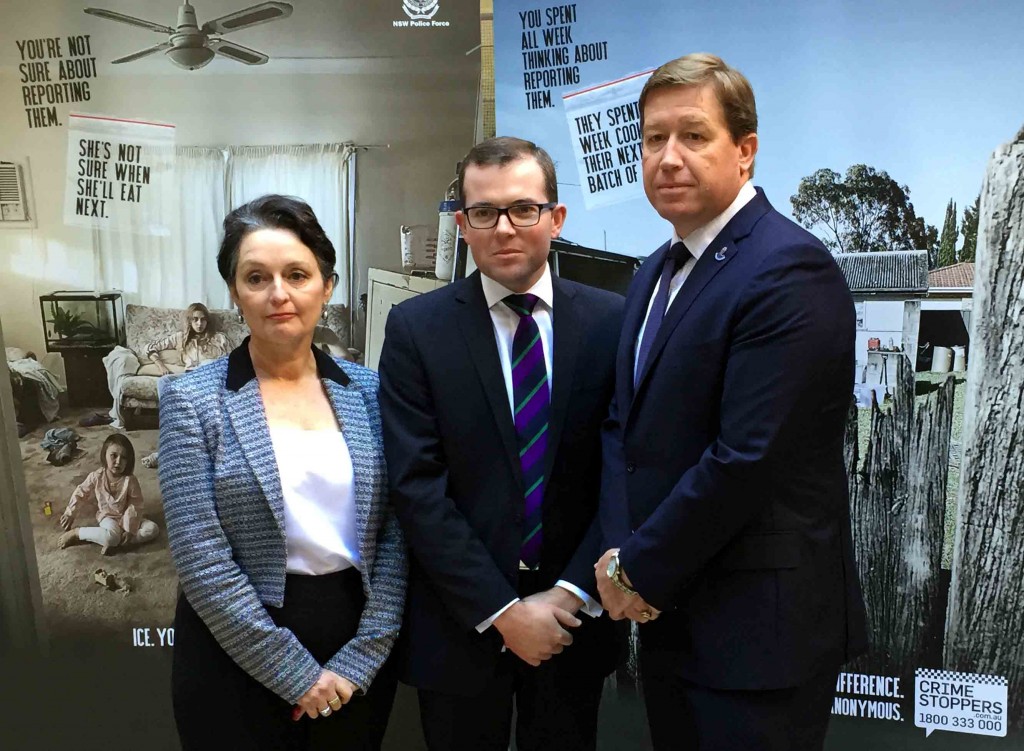 Member for Northern Tablelands Adam Marshall, centre, pictured with Deputy Premier and Minister for Police Troy Grant, right, and Assistant Health Minister Pru Goward today at Parliament at the launch of the new campaign against the drug ice.

“I urge anyone who knows or sees anything suspicious to anonymously phone 1800 333 000 and join the fight against this toxic drug in our community.”

Mr Marshall said he hoped this campaign would complement the good work being done by local police and community groups to raise awareness and stop the distribution and use of the dangerous drug in its tracks.

“What is clear is that every community is affected across every demographic. The evidence shows already that its use is growing alarmingly and we need to whole of community approach to addressing this.”

Deputy Premier and Minister for Justice and Police Troy Grant and former police officer of 22 years, said ice was devastating communities in metropolitan and regional NSW.

“I have never seen a drug as corrosive to human decency as the drug ice,” Mr Grant said.

“We need to work together as a community to stamp out this addictive, destructive and dangerous drug that is devastating individuals, families and communities across this State.”

Mr Marshall said the State Government had a targeted plan to stamp out the drug and support affected communities.

“As part of the government’s election commitments, harsher penalties for ice dealers will soon be introduced there will be increased treatment programs for those who fall into its grip,” he said.

$10million in support for bush kids through Royal Far West

The Vino Geek gets social with the New England wine industry