MOREE farmers Graeme and Vicki Gall are still counting their blessings, and thanking the huge group of volunteers, friends and fire fighters who helped avert what could have been a disaster of catastrophic proportions at their property, Wallambah, on the Croppa Creek-Moree road last Monday.
Just a day after bushfires ravaged much of NSW, causing widespread damage and heartbreak, the Galls were battling a stubble blaze of their own.

“We have just taken over our farm again after pursuing a cattle venture in Queensland,” Vicki Gall said.

Wallambah includes 7000 acres of cropping barley stubble – and it caught alight on Monday during the worse heatwave ever experienced in north-western NSW. 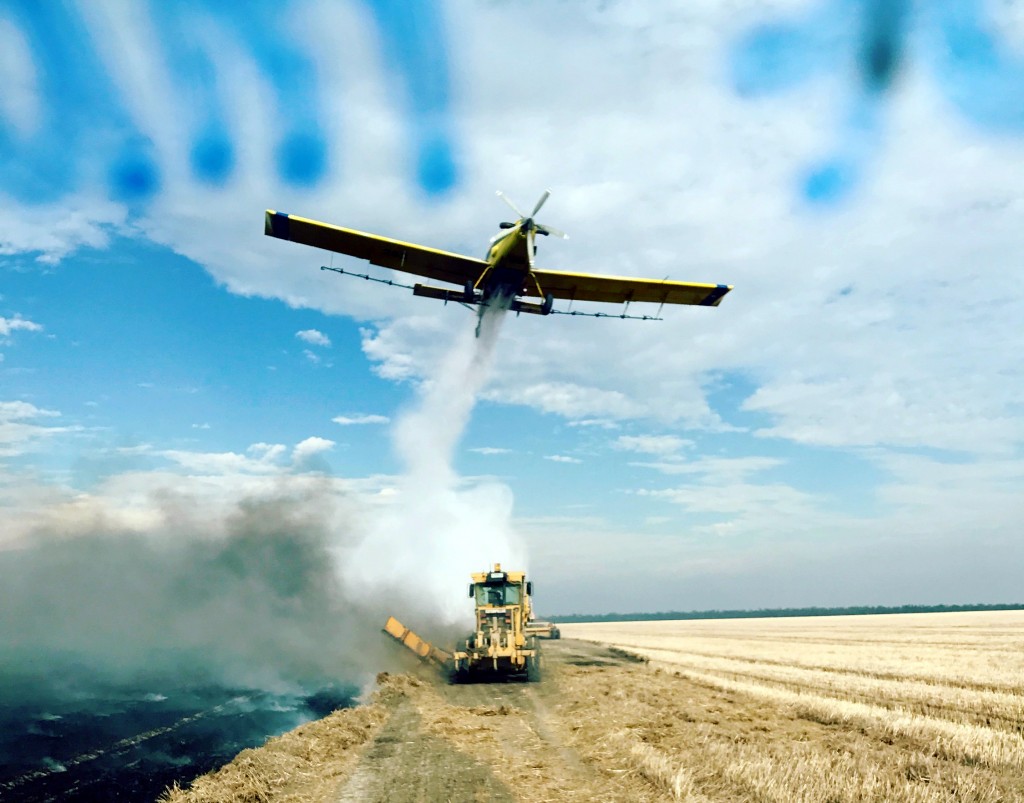 The stubble fire north of Moree is water-bombed by one of two planes supplied by Moree Aircair Aviation Services (Image Supplied).

About two- to three-thousand acres of stubble was wiped out.

But as the fire spread, so did a band of volunteers, friends and rural fire brigades who arrived en masse to help put out the blaze.

“The support we received from the local community has been nothing but fantastic,” Mrs Gall said.

“It’s hard to name everyone that came to help, because people just came and chipped in.

“Holt Livingston and Alistair Jones helped round up all the people and there would have been 50-plus people here,” she said.

“People are aware that if a fire isn’t stopped quickly it could end up on their farm as well. The community works on the premise that we go and help them in need and we reciprocate when they are in need.

“I’m unsure which rural fire brigades turned up but I do know there were services from Oodnadatta, Croppa Creek, Narrabri and maybe Pallamallawa as well as a fire infrastructure protection truck,” she said.

The Galls have nothing but praise for everyone who helped stop what could have been a major firestorm, especially Dave and Jo Warburton, from Moree Aircair Aviation Services.

“Dave and Jo used two planes to water bomb the fire and simply won’t accept payment for the service. This is very special – we are just so grateful,” Mrs Gall said.
“If the fire hadn’t been stopped it could have just kept going from one farm to the next.

“We managed to stop the fire just on dark, before it got in to the neighbour’s property.

“Everyone has a large stubble load at the moment – we are just so fortunate to be part of such a caring community,” she said.