Federal Member for Parkes, Mark Coulton was very pleased to present the Minister for Indigenous Affairs, Senator the Hon Nigel Scullion with a piece of Aboriginal artwork from his electorate at Parliament House in Canberra today.

When visiting Coonabarabran late last year, Mr Coulton was honoured to receive the painting entitled “Mutual Respect” on behalf of Minister Scullion from the local residents involved in the Burra Bee Dee Project 2015. 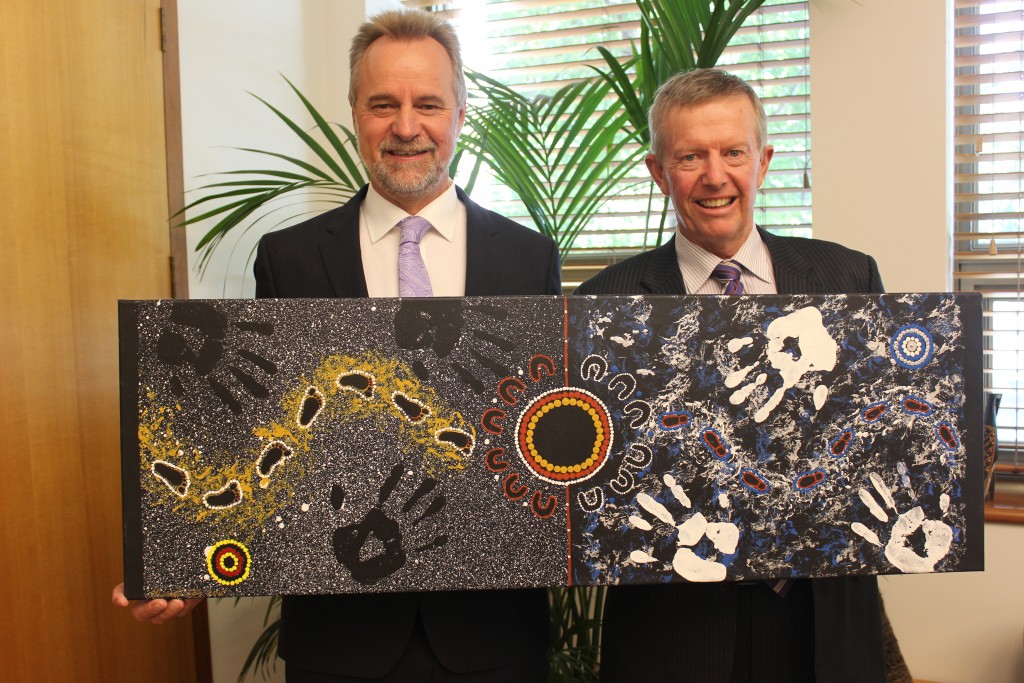 The significant painting is one of four created as part of the Burra Bee Dee Project.  The project aims to break down barriers between children identified as “at risk” and local Police.

“The painting symbolises Aboriginal people and police coming together to better understand each other and inspire the next generation,” Mr Coulton said.

“The centrepiece of the painting represents a meeting place where everyone comes together.”

Mr Coulton praised all of the local volunteers who readily give up their time to make Burra Bee Dee Project a reality for the Coonabarabran community.

“Police officers attached to Coonabarabran Police Station, the Coonabarabran Local Aboriginal Lands Council and members of the community dedicate an enormous amount of time to the kids in this project,” Mr Coulton said.

“Every Monday and Wednesday morning each week for 10 weeks, these volunteers collect the children from their homes, help them to undertake exercise, provide them with breakfast and then deliver them directly to school.

“I understand from Inspector David Maher of the Mudgee Local Area Command that the project has had remarkable results in children’s attendance and attitudes at school, as well as substantial reductions in minor crime committed by juveniles in the area.”

Minister Scullion has very kindly allowed the painting to be put on display in Mr Coulton’s office in Canberra.