MELANIE Bolwell had a day to remember at Tamworth today, riding three winners from the first six races.

The 21-year-old apprentice, who claims 3kg, had won on Stephen Dixon’s Poet’s Trick and Peter Cleal’s One Tin Soldier before adding a third leg with the Kevin Dixon-trained Wanda’s Girl in the JR Richards and Sons Class 1 & Maiden Plate (1600m).

She produced a beaming smile as the winning connections and media gathered.

“She loves the wet,” Melanie Bolwell said of Wanda’s Girl. 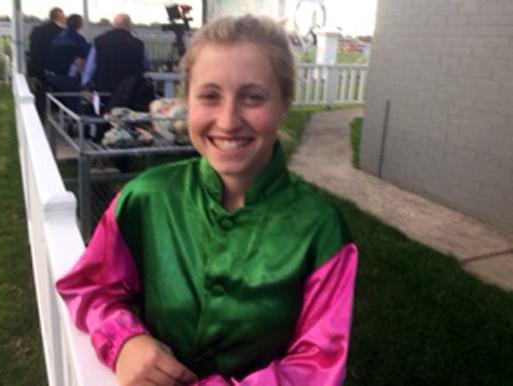 It followed her second double on a day where Kevin Dixon was full of praise for the young apprentice who is indentured to Sue Grills at Tamworth.

“She is riding well,” Dixon said.

“She (Wanda’s Girl) has to be ridden quiet so she will finish off.

“She jumped good today and Melanie held a good position in midfield.

“At the 600m she started to work her way through to third but I didn’t want her to go too early and she waited until they straightened. She’s a good girl coming back from a bad leg injury, too.

“It was good to win for old Charlie and Nell (Worley), too. They live down between Quirindi and Willow Tree but can’t get about. They listen and watch on TV.”

It was Wanda’s Girl’s second race win at her 38th start.

Dixon has been working her sparingly, spending most of the time swimming her as well as using an equi-massage machine.

“Just been swimming her.”

Message to Moree’s hoon drivers: Slow down or lose your vehicle

Next post
Message to Moree’s hoon drivers: Slow down or lose your vehicle