THERE’S a new breed of blokes hitting the streets of Moree, openly shunning meat pies for share platters, proudly passing up the stubbies for Shiraz and even unashamedly ordering salad in public.

Jordan Hunt and Zeb Chapman aren’t afraid of embracing their foodie culture and, come Saturday, they’ll be put to the test at the Moree on a Plate Blokes on the Barbecue competition, proudly supported by B&W Rural.

Jordan and Zeb are one of four teams competing for the coveted King of the Barbeque title, with last year’s winners, Alastair Spring and Paul Osborn from Rhodes Kildea, back to defend their title.

Each team will choose a cut of their chosen meat from local butchers, Reado’s Meats and South Moree Butchery, and will be allocated a mystery ingredient from the festival to incorporate into their dish. 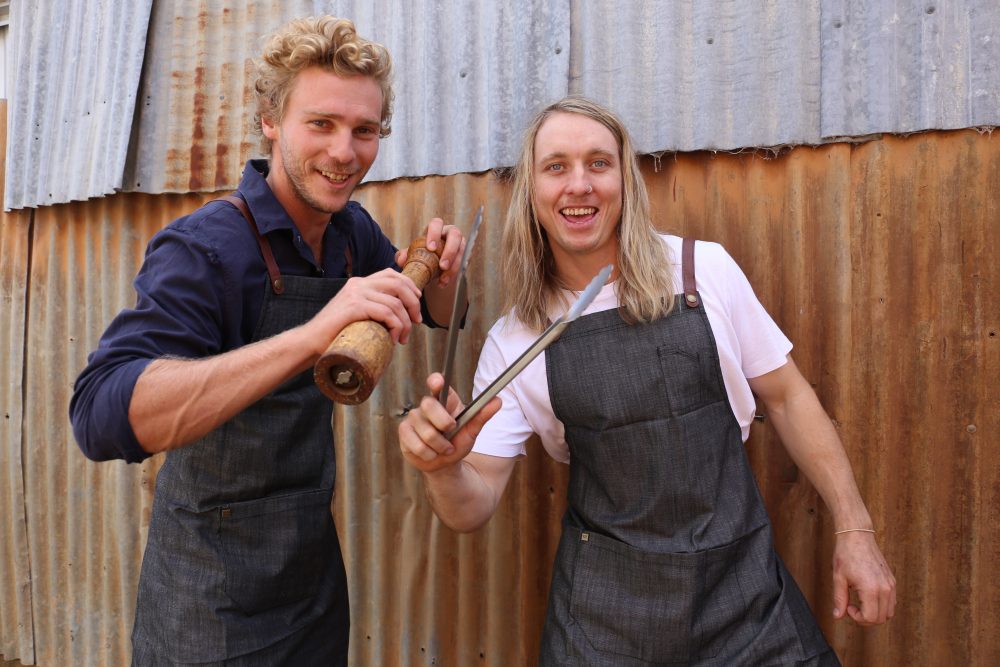 Jordan Hunt and Zeb Chapman are looking forward to firing up the barbecue at Moree on a Plate this Saturday.

“Honey is a great ingredient to cook with; it complements other flavours; it’s rich and it’s also handy at masking any mistakes,” Zeb smiled.

Zeb doesn’t shy away from his prowess in the kitchen – one of his favourite dishes to cook is honey glazed salmon.

“I love cooking. I put on some music, have a bit of red wine, some cheese and bikkies – it’s awesome,” he said.

And while they may seem like they’ve just stepped out of a Melbourne lane-way, Jordan and Zeb are born-and-bred Moree locals and best friends since Year 2.

“We often cook for each other, and in our bachelor days we spent many evenings cooking and talking about our girl problems – now it’s just me with the girl problems,” Zeb laughs.

While Zeb has recently taken a role at the NSW Department of Water, Jordan is a pilot at Aircair Aviation, and his adventurous spirit extends far beyond the skies.

Jordan is also the mastermind behind Hunt and Co, a motorcycle clothing and accessory brand that celebrates style as well as practicality.

“I guess from the look of us, we probably seem like the underdogs, but I think we may just surprise people,” Jordan said.

Although admitting his favourite dish to prepare is vegetarian, and Zeb’s is a salad, they concede their skills on the barbeque may seem dubious.

“We’ve definitely got a few tricks up our sleeve,” Jordan said.

“After all, we’ve basically grown up with Master Chef!”

Blokes on the Barbeque will kick off at 11.45am on Saturday, with each team given 40 minutes to cook prior to judging.

Other mystery ingredients include dates from the Narrabri Date Farm, Valla Macadamias and Grove Orange Juice.

Moree on a Plate thanks B&W Rural for sponsoring the event, Mitre 10 for donating a Weber Barbeque for the winner and Coles Moree, South Side Butchery and Reado’s Meats for donating ingredients.

Emcee for the cook-off, Antony Glynn, will no doubt keep the crowds well entertained.

Ayr to a Moree lifestyle: Bethany Kelly wouldn’t have it any other way

Next post
Ayr to a Moree lifestyle: Bethany Kelly wouldn’t have it any other way