Billy Fletcher farewelled with plenty of Slim Dusty, a few bush yarns and the odd schooner or two

THE bow-legged bushman was perplexed.

Fully-outfitted in his freshly-pressed Lee jeans, wide-brimmed Akubra hat, checked western shirt, RM Williams laughin’ side boots and plaited leather belt, he looked just a bit out of place as he waited for a transit bus on Pitt Street in Sydney’s CBD.

If the location had been MGM Movie Studios, this bushman from Moree would have been excused for wandering off the set of High Noon on to The Wolf of Wall Street.

He wasn’t quite familiar with the way of city folk.

After all, this was his first trip to the city – any bloody city, for that matter.

But he needed a bus to visit his aunt Mary in the suburbs and, if it had been any other place and any other time, he would’ve simply jumped on his trusty old grey mare and found his own way there.

But Pitt Street was no place for a bushman and his horse so he waited at the bus-stop, still not quite sure what to do.

He figured, however, that if he just kept an eye on the person in front and followed their lead he’d be OK.

This bow-legged bushman just happened to be standing behind a young city girl and when the bus door ‘swooshed’ open, she hopped on board and told the conductor: “Marylands, single”.

She paid her fare and found her way to a seat.

The bushman smiled. This is easy, he reckoned. No problem.

He stepped on to the bus and, mindful of what the young lass had said, told the conductor: “Billy Fletcher, married, four kids.”

There is no concrete evidence to back up this yarn, but it’s just how Athol “Billy” Fletcher told it one Saturday afternoon while breasting the bar at Moree’s Victoria Hotel – and it was just one of myriad yarns that would be told by Billy over the years as he sipped on a schooner of Toohey’s Old at his favourite pub.

Billy Fletcher during his younger days as clerk of the course at Moree racecourse (Image Supplied).

Mind you, Billy didn’t just breast the bar, either – on most occasions he held court.

Sadly, Billy passed away last week at the age of 89 – just eight days shy of his 90th birthday.

He’d long retired from horseback, but still enjoyed a schooner or two at his favourite watering hole – as well as quite a few tickets in the meat-tray raffles.

Some of those Saturday afternoon sessions could stretch out a bit, too, especially when his beloved St George Dragons were playing on the big screen.

Billy was born in Bingara in 1928, one of six boys to parents Jack and Evelyn Fletcher.

Billy and the love of his life, Alice were married in 1952 and they remained together for the next 66 years, bringing into the world Owen (Bimbo), Terry, Brenda and Verna.

Billy was employed by Moree Plains Shire Council for 40 years, chiefly as pound-keeper, and he was a well-known sight around the streets of Moree – always on horseback.

He was also an accomplished drover and there weren’t many travelling stock routes across this big, brown land that hadn’t been traversed by Billy.

He was rarely without a horse, and over the years there were many including Pancho, Popeye, Blue and Omo. 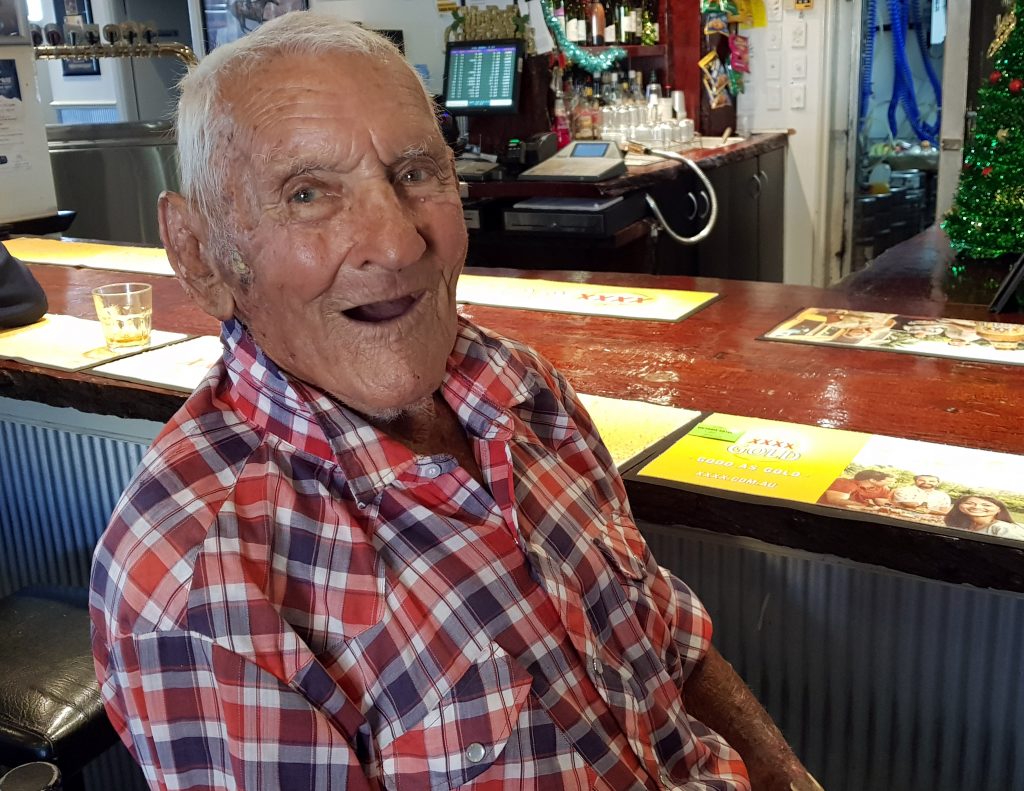 Billy Fletcher enjoying a cold one at his favourite watering hole, The Victoria Hotel in Moree (Image Copyright Bill Poulos).

And just about every one of them was with him any given year during his time as clerk of the course at Moree, Mallawa and Talmoi race meetings.

“Billy would draw strangers to him with his bush poetry, some of which was for adult ears only,” Ian chuckled.

“He and Ollie Kane often rode their horses to the pub for an afternoon beer and it was a common sight to see two horses tied up to a kurrajong tree in front of the Victoria Hotel or Post Office Hotel.

“In a chat with Billy recently, he told me that he had never had a motor vehicle license but drove a bullock dray after school from Bingara to the Kelly’s Gully railway yards loaded with wool – his grandfather taught him to ride,” Ian said.

Billy was farewelled on Monday in just the way he would’ve wanted.

There were endless yarns told over quite a few cold beers with Slim Dusty in the background singing The Traveller’s Prayer, Leave Him in the Long Yard and, of course, The Pub With No Beer.

But, rest assured, the legend that is Billy Fletcher will live on forever – there are just too many yarns and good stories to be told again and again for this legend to fade.

Share
Share:
Jo White’s artistic gift to be channelled from palette to canvas ‘live’ at The Moree Gallery