Australia says “yes” as Moree couple prepare to say “I do” . . . again

WITH the federal government’s pledge to have same sex marriage institutionalised by the end of the year, Moree couple Merri-May Gill and Fi Claus can’t wait to tie the knot . . . again.

The popular singer-songwriters were married in a civil ceremony at Orley Park in Brisbane suburb New Farm on May 6, 2006 however there was one vital document missing – a government-endorsed certificate decreeing the union.

“The same-sex marriage survey is a brilliant excuse for a much bigger celebration and it will most likely be in Moree this time,” Fi said.

More than 12.7 million eligible Australians participated in the voluntary Australian marriage law postal survey, with 7,817,247 respondents, or 61.6 percent of the vote, saying Yes to same-sex marriage.

“I am just so very glad that this has happened in our lifetime,” Fi said.

“We are so excited to hear that soon we will have the same government certificate as every other married couple. This means so much to us, as it is effectively a statement that our love and life-long commitment is equally as special and valid and valued by our community as that of all our many friends who have those certificates in their family homes already.

“We signed a beautifully worded certificate (including our vows) created by our celebrant, but our relationship status was legally unchanged, which meant it was only equal to that of any de facto couple,” she said.

Fi said that the same-sex marriage survey result also sends a vital message to young people who may be realising or struggling to come to terms with not being “straight”. 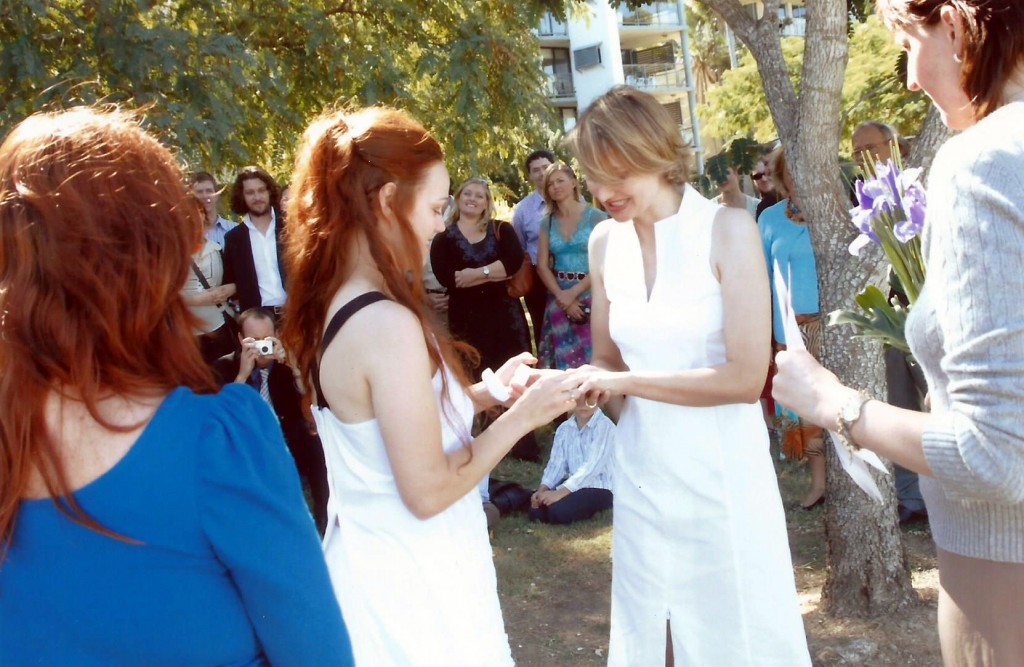 Fi Claus and Merri-May Gill were married in Brisbane in 2006 in front of 70 close friends and family (Image Supplied).

“They are equally as valuable to society as their hetero friends, and therefore deserve the same affection and pride from their families when they find someone they will love and cherish for the rest of their lives,” Fi said.

Fi says that the recent survey was not just about same-sex couples legitimately marrying. She believes the Yes vote will also help address the many social problems and mental health issues associated with same-sex relationships – issues generally brought about by non-acceptance from minority sectors of the straight community. 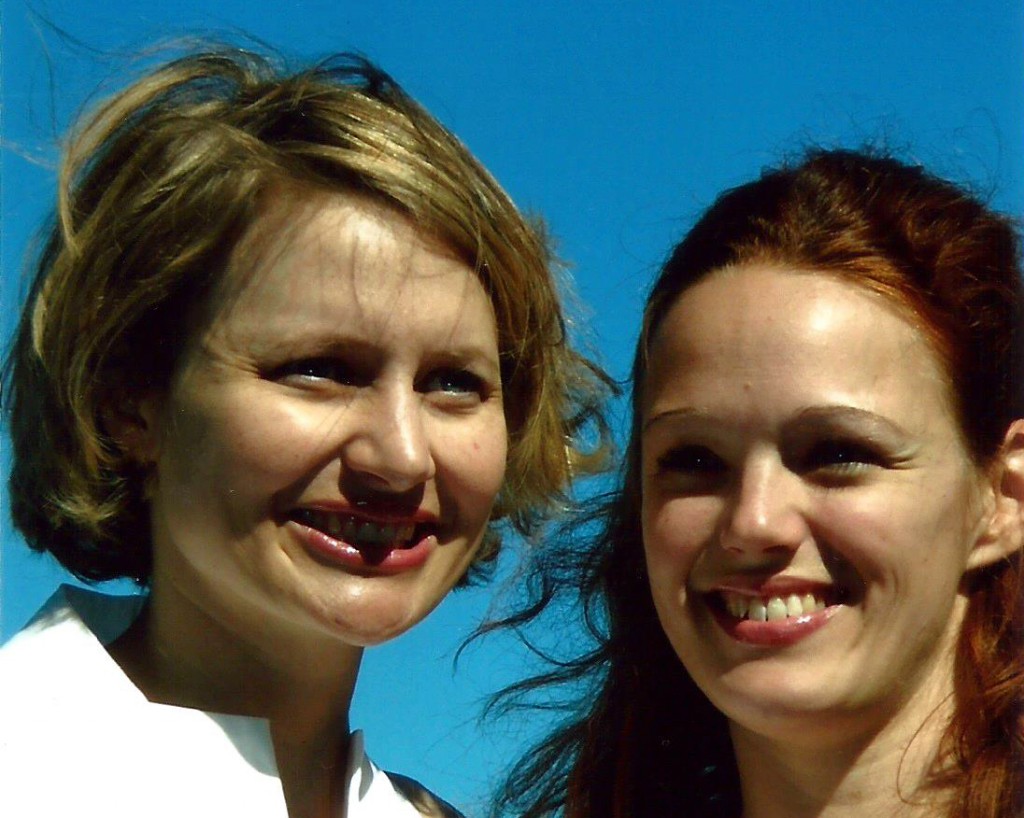 Fi and Merri-May on their wedding day at Orley Park in Brisbane suburb New Farm. They plan to do it all again in the New Year (Image Supplied).

“This has already happened in the United States. Youth suicide rates dropped 14 percent since the Supreme Court there ruled in favour of same-sex marriage . . . that’s saving the lives of more than one in every 10 teens.

“At every step of the way, straight people are congratulated heartily by family and peers – when they introduce their first boyfriend or girlfriend, when they get engaged, and when they get married.

“For gay people, it has historically been something that you hid for some time as you dreaded the fact it either made parents and friends ashamed, or at best, say ‘oh, good for you’ – but never the genuinely celebratory ‘that’s great!’ or ‘congratulations – that’s such wonderful news and I’m so proud of you!’.

“That kind of lack of approval really hurts . . . I suffered from depression for this reason,” Fi said.

“You don’t talk about it, but it really gets to you. So this huge statement by the Australian people that gay people no longer need to hang their heads, and that they and their love and caring for each other through life as soulmates are just as special is so wonderful,” she said.

Fi and Merri-May met in Brisbane in 2002 when Merri-May was playing a gig with hugely popular musician Pete Murray, whose first three full-length albums, Feeler, See the Sun and Summer at Eureka all reached number one on the Australian music charts.

“Pete was supporting Merri-May – it was before he became famous,” Fi grinned.

“We happened to bump into each other at a few festivals at which we were both performing and got to know each other when Merri-May was recording an album in Melbourne in early 2003, which was where I was based back then,” she said. 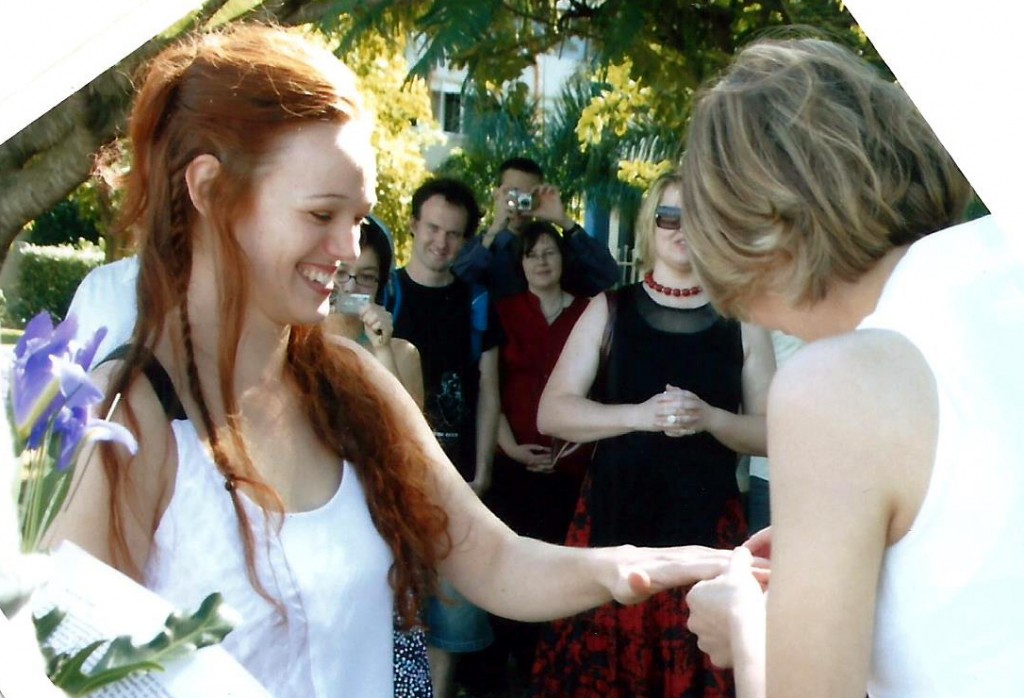 With this ring I thee wed . . . Merri-May and Fi confirm their love for each other (Image Supplied).

The couple became a couple in April, 2003 and were engaged 12 months later. They married 11 years ago in front of 70 close friends and family members.

“Michele Watt from The Kransky Sisters played Here Come the Brides on her tuba as our walk-down-the-aisle music, which was such a fun way to start the ceremony,” Fi said.

“It had everyone relaxed and beaming with big smiles instantly, and we each carried beautiful bouquets of our favourite flowers – irises.

“Our celebrant was Maria, one of Merri-May’s former share-house friends, who also has a super sense of humour,” Fi said.

“Maria put extra effort into preparing a beautiful speech which she said contained the kind of sentiments she would have loved at her own wedding.”

Maria told the wedding party and guest that falling in love was easy. 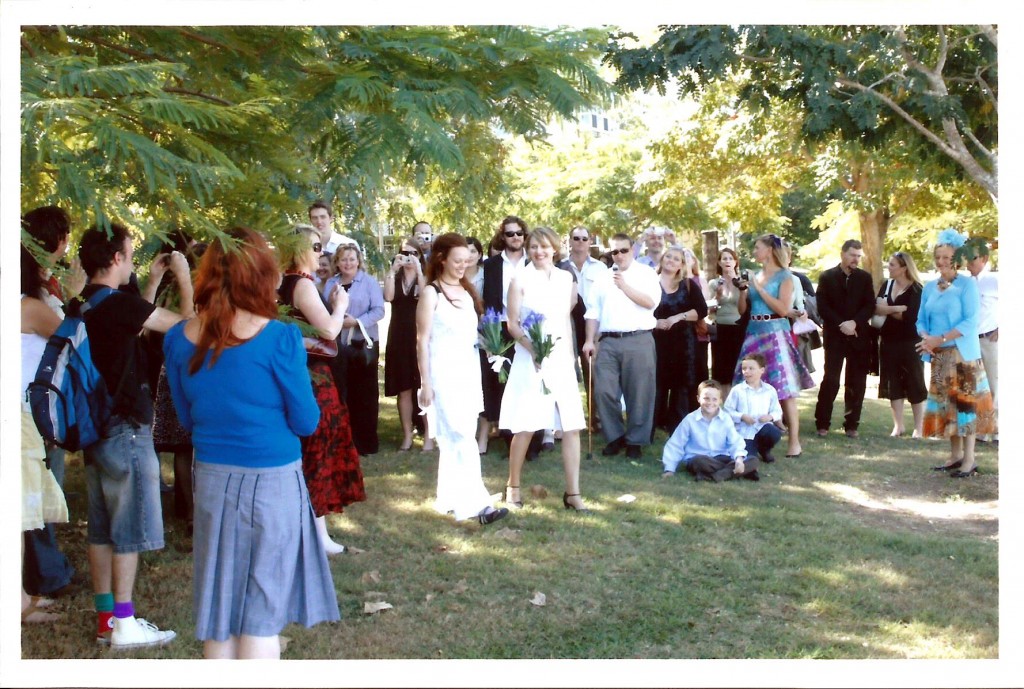 Merri-May and Fi walk down the aisle to Here Come The Brides, played on the tuba by Michele Watt from The Kransky Sisters (Image Supplied).

“The hard part is finding someone to catch you,” she said.

“Now that Merri-May and Fiona have caught each other, they are about to share their most significant moment in their lives with you – their commitment to each other.”

Maria also drew humour from Fi and Merri-May’s entertainment careers, which have rocketed in recent months with the release of their debut album, Sunday Heart Parade.

“As your lives change from a solo to a duo, in front of your most loyal fans, may you always be in tune with yourselves and each other, living in perfect harmony and making beautiful music together,” she smiled.

Australians voted a resounding Yes in the history-making plebiscite.

Of the eligible Australians who expressed a view, 61.6 per cent supported changing the law to allow same-sex couples to marry and 38.4 per cent did not.

In the vast Parkes electorate, which covers nearly 400,000 square kilometres of New South Wales including Moree and Mungindi to the north, Bourke and Cobar to the west and Condobolin and Lake Cargelligo to the south, 78,516 votes were counted.

Results from the nearby New England electorate were almost identical percentage-wise to Parkes.

Those aged 70 to 74 were the most likely to respond to the survey, with 89.6 percent of eligible Australians in this age group participating.

The participation rate was lowest in those aged 25 to 29 at 71.9 percent. The youngest age group of eligible Australians (those aged 18-19 years) were more likely (78.2 percent) to participate than any other age group under the age of 45 years.

The ABS’s chief statistician David Kalisch said the participation rate was high for a voluntary survey.

“This high response rate far exceeds expectations and compares extremely favourably with other voluntary exercises conducted around the world thanks to the strong interest and engagement of eligible Australians in this topic,” Mr Kalisch said.

The ABS had rigorous methods in place to avoid fraud, manage risks and protect the integrity and privacy of all responses.

“Independent assurers checked our approach and actions along the way, and external observers reviewed our coding processes,” Mr Kalisch said.

“This combined with our efforts to ensure only one response was counted per eligible Australian, means Australians can have confidence these statistics reflect the country’s views.

“The ABS conducted this survey to the standard expected by the community, and to meet the requirements of the Legal Direction from the Treasurer.

“We’re grateful almost all respondents complied with the survey instructions and this enabled extremely accurate response coding, allowing us to quickly produce these results and complete all the requirements of the Treasurer’s direction,” he said.