MEMBER for Northern Tablelands Adam Marshall has offered his congratulations to Armidale environmentalist Kath Wray, former long-serving Warialda-based councillor Bob Tremain and former councillor John Coventry from Bonshaw who were today named in the Australia Day Honours list as recipients of the Medal of the Order of Australia (OAM) in the General Division.

Mr Marshall said the awards were an official recognition of the outstanding contributions each recipient had made to their respective communities.

“Armidale is very fortunate to have Kath Wray working for the conservation of our local environment through her many volunteer roles with community groups,” Mr Marshall said.

“She was a founding member and long-time president of Citizens Wildlife Corridors, a life member of Australia Plants Society, committee member of the Armidale Tree Group, Rivercare Group and Northern Tablelands Vegetation Committee and a volunteer at the UNE Herbarium for eight years.” 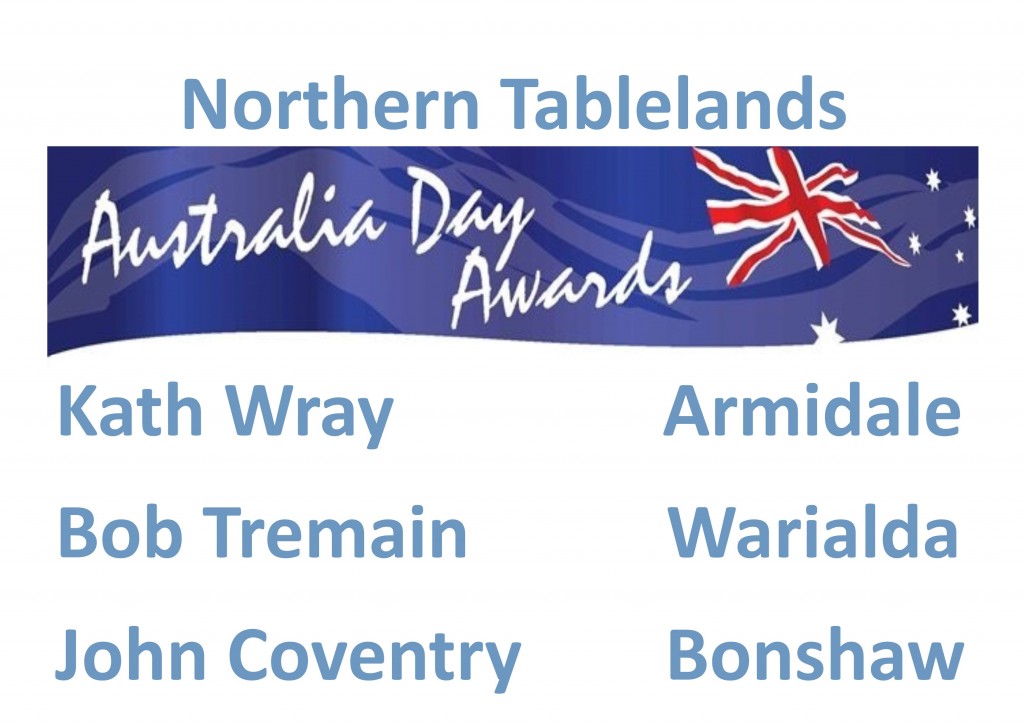 Mr Marshall said this wasn’t the first time Ms Wray had been recognised for her work in the community.

“Kath was the recipient of the Individual Landcarer Award at the 2013 Border Rivers/Gwydir Regional Landcare and Catchment Management Awards and a finalist that year in the NSW Landcare People’s Choice Awards,” he said.

Mr Marshall said Bob Tremain had been involved in local government as a councillor and mayor of Yallaroi and Gwydir Shire Councils for a remarkable 31 years – 1977 to 2008.

“Bob has dedicated a huge part of his life to serving the Warialda and district communities in local government,” he said.

“In that time he also served as a volunteer with the NSW Rural Fire Service, the Warialda Rugby League Club and the Warialda Show Committee.

“I worked with Bob as a fellow mayor and have seen his commitment to the community first-hand.”

Bonshaw’s John Coventry, was recognised for his service to local government and to the community.

“John is a very active member of the Bonshaw and wider community, with a strong interest in our environment and retention of services in the bush,” Mr Marshall said.

“Over many decades he has served on a number of community and statutory organisations including as the President of the Inverell Shire Council from 1985 to 1989, Chairman of North West Electricity from 1987 to 1995 and Chairman of the Local Government Border Rivers Project.”

Mr Marshall said that to be acknowledged on Australia Day in the Honours List was one of the highest individual acknowledgements of service to our community.

“Kath, Bob and John are such positive influences in our community and I’m delighted they have been honoured in this way,” he said.

“I extend my best wishes to them all and on behalf of the community, my most sincere gratitude.”