Mr Marshall says the Colour Me Kamilaroi publication will design, select and produce the images and art work for e-book publishing and use in local educational circles.

“Already there’s been a series of workshops with local artists to come up with some preliminary designs of Kamilaroi-inspired pictures, designs and Dreamtime stories that could be incorporated into the colouring-in book,” Mr Marshall said.

“The $3000 grant from the Country Arts Support program will underwrite this and not only entertain and educate readers and colour artists, but also unearth and promote some more up-and-coming indigenous artists in the Kamilaroi clan.” 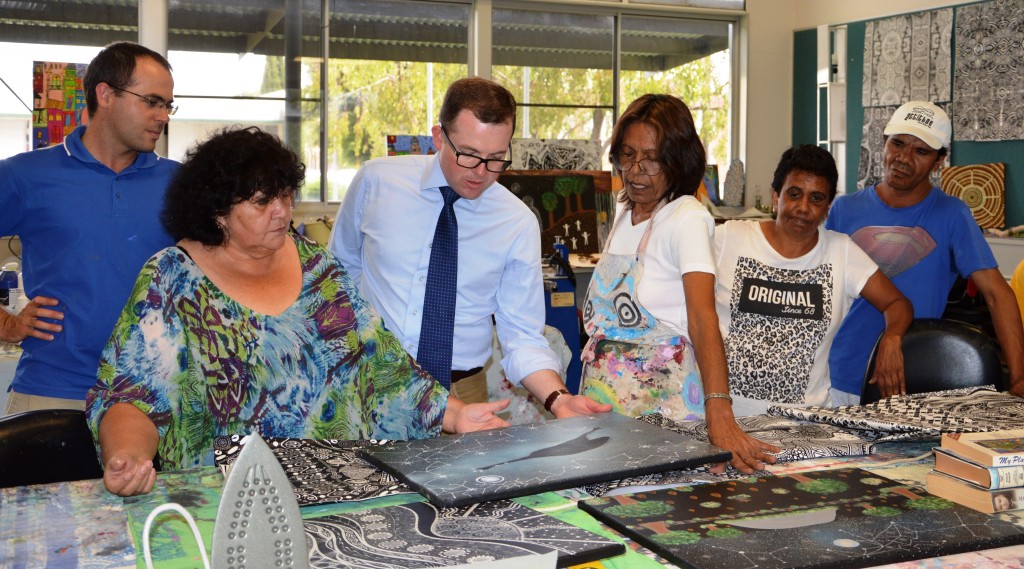 Colour team from left, Brent Emerson and Ann Johnson, MP Adam Marshall, and Liz Munro, Jenny Craigie and George Madden look at some of the inspiring works being considered for the new arts project at Moree.

The head teacher of multi discipline business and education at the Moree TAFE campus Elizabeth von Gavel said the book was a contemporary approach to the traditional passing on of knowledge and a vehicle to address the issues facing Aboriginal people today.

“We identified through community consultation in 2016, and our strong relationship with the local Aboriginal community identified the need for a project that addresses the promotion of traditional art forms delivered in a contemporary way which provides a means of preserving the rich Aboriginal cultural heritage of the region,” Ms von Gavel said.

Mr Marshall said the project allowed for experienced artists and cultural elders to work with indigenous artists to revive or enhance visual art skills in the community to promote cultural identity and pride.
He said the project team hoped to publish a hard copy edition later on but an exhibition of the works would be held at the Mehi Gallery and Studio at the TAFE in Moree“We’ve seen in the past few years the re-emergence and popularity of colouring-in books in general – particularly for adults and older people and not just kindy kids. It is a calming experience and a quietly satisfying one for anyone,” Mr Marshall said.

“The exhibition and the project book will help share the images of the past, guided by the cultural leaders but importantly also help educate the non-indigenous community and give them a better understanding and appreciation of the artistic culture of the Kamilaroi,” Mr Marshall said.