IT has often been said that a week is a long time in politics.

And the adage could not be closer to the truth for a handful of candidates seeking election – and re-election – in the Moree Plains local government election.

Glen Crump, who strongly believes that younger Moree citizens should have greater representation on council, is unsure he can get enough preference votes to gain entry to Moree Plains Shire Council’s Balo Street bunker.

“As a first time candidate I was very pleased with the first preference tally,” Mr Crump said.

“Now there are a couple of very nervous days ahead for quite a few of us, as we start to see the preferences flow.

“I believe this has been a very interesting campaign for all involved,” he said. 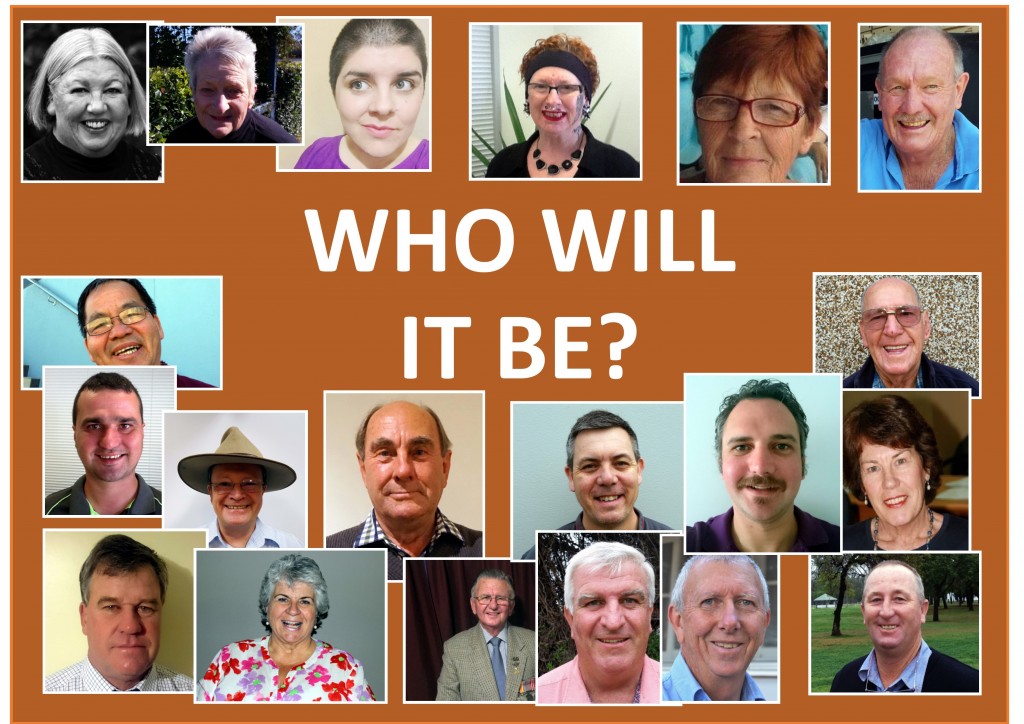 “I’m not sure who will get through, other than Katrina (Humphries) and Mick (Cikota) – preference flows are hard to predict, especially  with twenty candidates,” Mr Smith said.

Retired  utilities area manager Jim Crawford, who says working in a team environment to achieve set outcomes within budget and on time is a priority, is ninth in order of entry with 250 first preference votes.

“Without preferences I would be elected. However, the allocation of preferences commences today (Tuesday) and that changes everything – it is a convoluted process and a final result probably will not be known until Thursday,” Mr Crawford said.

Retired medical centre practice manager Rhonda Lang, who believes there has been a lot of negative feedback from the Moree community in relation to the money spent on the Gateway project, says she has a couple of sleepless nights ahead.

“I am currently in 11th spot, but with only 197 primary votes so it will go right down to the wire I think,” Ms Lang said.

“However, experienced campaigners tell me I still have a slight chance . . . it will be a nervous wait.”

“It is all dependent on the flow of preferences, of course, and only three, maybe four, of those councillors seeking re-election will probably be elected,” Mr Tramby said.

Retired builder Stephen Ritchie, who polled best of the ‘newbies’ with 555 first preference votes, said he is still not confident of gaining a seat.

“I never count my blessings until they are actually realised,” Mr Ritchie said.

“I’m not confident at the moment and now it’s a case of playing the waiting game . . . it will be a couple of days at least before anything is set in concrete,” he said.

Lucas Swan, a 32-year-old Moree solicitor who is deeply concerned about Moree’s drug problem and crime rate, says the preference voting system is complex, ” to say the least”.

“Australia is one of the few countries in the world that implements the preference voting scheme, with the majority of democracies adopting the “first-past-the-post” system, meaning the persons with the most amount of initial votes win,” Mr Swan said.

“With preferences however, the system requires a complex system of vote sharing and although complex, the preference system ensures that every person’s  one-through-five vote matters.

“This is a flaw with the “first-past-the-post” system in that if out of 20 candidates the most popular nine people are elected from their No.1 vote without preferences. We are in essence disregarding the votes of all of those people who voted for the other 11 candidates. In short, the preference system ensures that every vote matters,” he said.

“While I’m disappointed that I haven’t achieved a majority to secure my position on Moree Plains Shire, I believe that the influx of interested people in the community is cause enough for the next council to acknowledge that people aren’t happy with the current direction.”

Mike Montgomery, who first sat on council in 1987 when just 27 years of age, is attempting to re-enter the fray after a four-year hiatus.

Mr Montgomery served 25 years as a Moree Plains councillor, including a six-year term as mayor, and was also national president of the Australian Local Government Association.

He said all candidates, whether they emerge winners or losers, deserve congratulations for stepping up to the plate.

“The Electoral Commission has its own processes and no doubt it is ultimately efficient in that recounts are rarely required,” Mr Montgomery said.

“It is frustrating though, that it seems an interminable wait to get any indication of who is ahead or falling behind, but eventually they will press a button and all will be revealed.

“Nonetheless, we are blessed that so many were willing to put their hand up for this election. It’s not easy to offer yourself up to be judged so openly, knowing that most will be rejected.

“We should thank all the candidates for playing a part in what really defines our society,” he said.

“It can make or break you, and often to the detriment of candidates who should  – but won’t – get in,” Ms Cassells said.

“It’s a system that perhaps needs looking in to, but that’s just one of many issues to consider in this campaign.

“It has been really interesting meeting all the candidates, listening to the concerns of such a diverse community, and running with two extraordinary men (Glen Crump and Lucas Swan), that I think a great deal of.

“Win, lose or draw, as the saying goes, it’s been one hell of a ride,” she smiled.