And then there were 12: Anna Winter prepares for leaders’ leap of faith

GIVEN everything that Moree’s Anna Winter has been through during the past eight months, abseiling down the side of a 10-storey high silo should be a piece of cake – just don’t mention the word “cake”.

Ms Winter has taken all before her in recent months, gaining national prominence as a contestant on Network Ten’s The Biggest Loser: Transformed.

And she did her hometown proud by shedding more than 50kg – or nearly half the original 117.2kg she weighed in at when joining the show.

With an entire town willing her on, Ms Winter endured a gruelling regimen that now sees the 40-year-old a svelte 67kg.

Now, she says, it’s time to give back to the town that gave her so much.

Ms Winter has decided to overcome her fear of heights the best way possible – by jumping from a 10-storey silo with another 11 brave souls who have committed to taking up the Leaders’ Leap challenge to raise money for the Westpac Rescue Helicopter Service.

“One thing that I said when I applied for Biggest Loser: Transformed was that if I had the opportunity I would give back, and I intend to do that,” Ms Winter said.

“Participating in the Leaders’ Leap is part of that – giving back to the Moree community.

“I could not have done what I did on Biggest Loser: Transformed without the support of all my friends and family and the people of Moree.

“And Moree is my hometown – it’s all about locals supporting locals,” she said.

Ms Winter admits that 12 months ago she was precariously close to maybe needing the helicopter rescue service had she not decided to completely overhaul her diet, fitness and lifestyle.

“Doing this leap is also close to me from a health perspective,” Ms Winter said.

“A lot of illnesses can be caused by people not looking after themselves properly, and that’s one big thing that I’ve realised.

“I was morbidly obese and could’ve had a heart attack at any time – there’s every chance that I could’ve needed that helicopter.

Anna Winter has shed 50kg in the past six months and will now tackle her fear of heights by abseiling down the B&W Rural silo to help raise money for the Westpac Rescue Helicopter Service (Image Copyright Bill Poulos).

“I want to encourage people to change their lives – and lifestyles. Sometimes accidents can happen and sometimes things can be prevented by changing or losing some habits,” she said.

“When I saw that the Leaders’ Leap was being put together, I thought that there would be nothing better than to be involved with something like that,” Ms Winter said.

“Westpac Rescue Helicopter is, unfortunately, something that everyone could be using one day and it’s something that our town needs and has to have – it’s vital.

“Sadly, we see the helicopter above the skies of Moree quite often and when we do hear it and see it, we all think ‘oh, no . . . who is this going to be’, because everyone knows everyone in a small community like Moree.

“One of the girls I box with had a bad farming accident and suffered some severe burns. She could’ve lost her life if it wasn’t for the Westpac Rescue Helicopter Service,” she said.

“There are so many ways this vital service is used – patient transport from hospital to hospital, emergencies on farms, road accidents or getting patients out of Moree for specialist treatment at Newcastle, Brisbane or Sydney.

“Anyone could need it at any time, and we are so lucky to have it,” she said.

But while Ms Winter has overcome a huge list of mental and physical hurdles in recent months, there is one fear she must face on June 18 – her fear of heights.

“No, I’m not so good with heights,” she smiled.

“I do have a bit of a fear but I do know that after what I’ve done and been through in the past few months that I can do this.

“Yes, I am afraid of heights, but I’m just going to dig deep, close my eyes and have a crack at it,” she said.

Supporters can donate to the leader of their choice by visiting https://leadersleapmoree2017.gofundraise.com.au/ 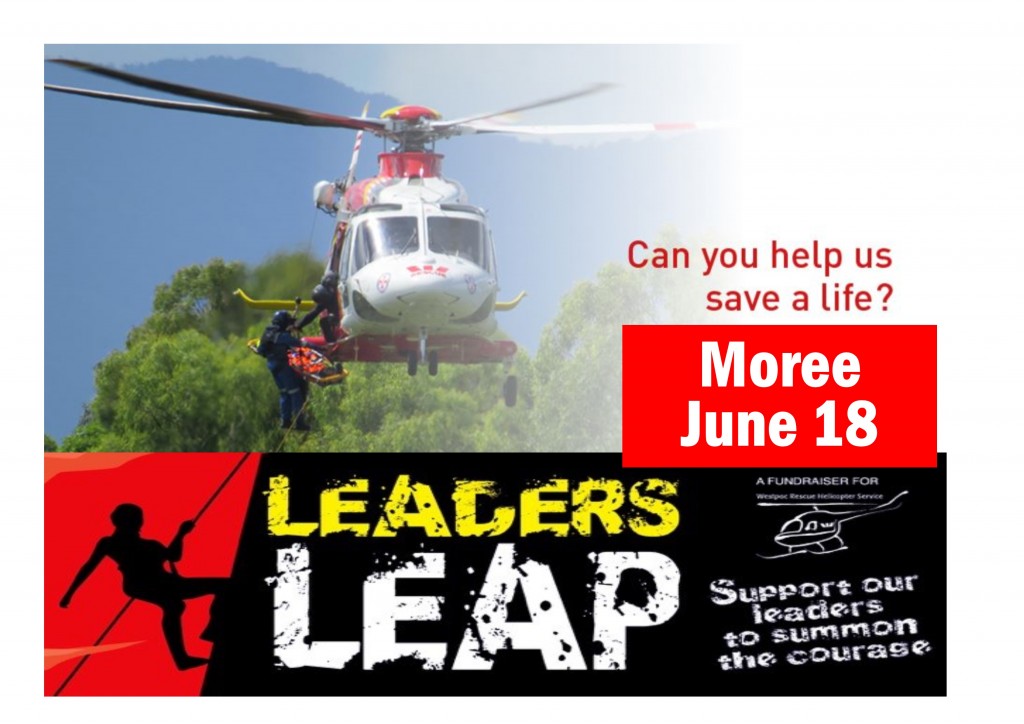