THE YEAR IN BRIEF

2017 has been defined by infrastructure development, with several major milestones for major infrastructure projects, each promising to help our region accommodate further growth.

December saw the grand opening of the Armidale Regional Airport, built to an international standard with $8.05 million of NSW Government support

Work is wrapping up on the $4.6 million Boggabilla to Toomelah water security project, with 15km of bi-directional pipeline laid, the water treatment plant built and manufacturing underway on both water inlet systems

The $60 million Armidale Hospital redevelopment is now structurally complete, with fitout works concluding in preparation of a grand opening early next year

The Inverell Hospital redevelopment is fully funded, with public designs and an expanded clinical services plan to meet the town’s exceptional population boom

A whopping $250 million in funding for vital new infrastructure projects including:

$23 million to plan and start construction of heavy duty pavement upgrades for the Newell Highway between Mungle Back Creek and Boggabilla,

$1.3 million to extend early childhood education through increased capacity and preschool services – with preschools in Moree, Inverell and Armidale to welcome 56 more students

Over $7 million to address maintenance backlogs at schools across the Northern Tablelands, including a $1.2 million upgrade project at Glen Innes High School, which will be finished next month

Regional councils are stronger than ever, with a new framework for Joint Organisations

Councils are in the front seat for the $1.3 billion Regional Growth Fund, helping to direct projects demanded by their communities

New legislation to crack down on regional crime, empowering police and landholders to act against poaching, stock theft and trespassing

There’s never a quiet year in the Northern Tablelands, but 2017 has been truly incredible. Our region has seen unprecedented investment in regional infrastructure, developing hospitals, airports and schools. It’s been a real privilege to work in partnership with communities, individuals and local councils to bring these projects to the front of the queue – after some of them had been languishing untouched for many, many years. But it’s not just the large-scale works that have gone ahead, with hundreds of smaller projects in our towns and villages also attracting attention from the top levels of government. 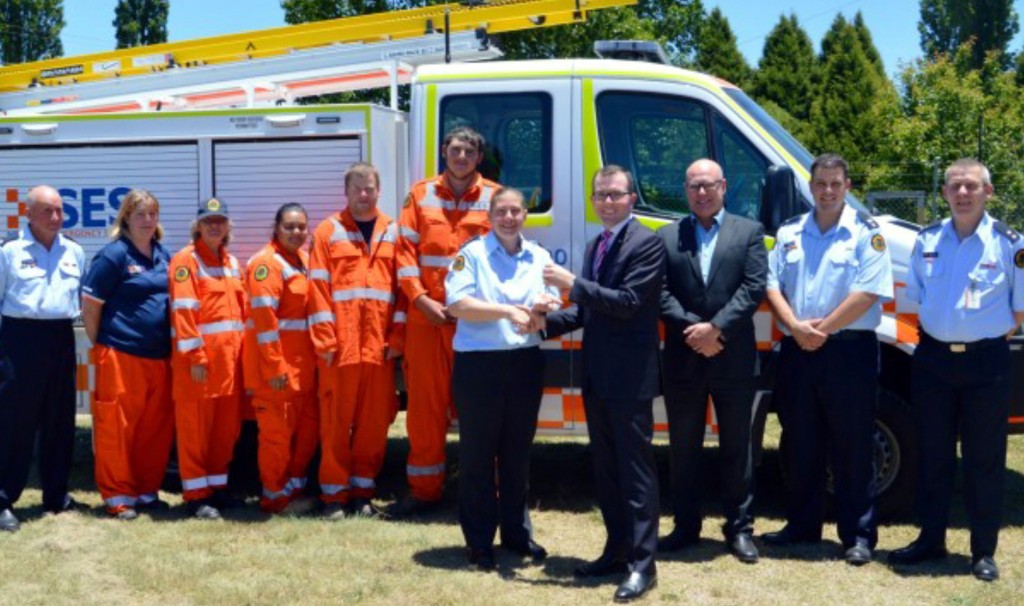 2017 has seen the introduction of the NSW Government’s $1.3 billion Regional Growth Fund. Coupled with the $300 million Regional Growth Environment and Tourism fund, this is an incredible investment in rural and regional areas. The programs are looking to support all the major aspects of country life, with targeted funding for cultural venues, sporting facilities, job creation and improving connectivity. The NSW Government has been working with community groups and local government to prioritise projects which will be announced early in the New Year.

The $60 million Armidale Hospital redevelopment is now in its final stages. The project is ‘watertight’, with all structural work complete, and the interior fitout largely finished. Staff will have time to familiarise themselves with the many improvements and clinical upgrades ahead of the opening early next year.

We’ve also seen incredible progress on the Inverell Hospital redevelopment – with funding fully acquired in the budget, design work now public and an improved clinical services plan on the way. There may have been some recent hurdles, but I am working with local GPs and Inverell Shire Council to ensure that the new hospital offers even more improvements and expanded services in every way (even more than originally announced), boosting capacity and services for decades to come.

On the ground, the 2017/18 NSW Budget provided $46 million to repair and upgrade the region’s roads – improving capacity, reliability and safety for drivers. The Newell Highway has will benefit from over $30.5 million of upgrades to rebuild sections of the roadway, provide safer overtaking opportunities and replace an outdated bridge. Councils were provided with $10 million to ensure maintenance is up to scratch on local roads, big or small.

Air travel is a vital link for many regional communities and this year has seen growth in both services and infrastructure. The new terminal at Armidale Regional Airport has opened its doors, offering improved comfort and security with capacity for an additional 100,000 passengers by 2025. Inverell has seen flights touch down once more, with FlyCorporate now offering daily return flights to Brisbane. A $2.5 million upgrade to Moree’s airport has installed new lighting, offering safer travel for 34,000 passengers each year. Moree also has a daily Brisbane air service to match the well-supported QantasLink service the Sydney.

Water security continues to be strengthened across our region, with projects to ensure reliable access to drinking water quickly progressing across the region. The $4.6 million Boggabilla to Toomelah pipeline is complete, with the project now awaiting completion of inlet stations on either end. I have secured some 1,500 signatures on a petition urging enhanced water security in Guyra and Armidale Regional Council has developed a strong business case with support of council and community. I will continue to lobby the NSW Government to fund the project, which would build a pipeline between Guyra and Malpas Dam.

The safety of our communities is paramount, with the Northern Tablelands seeing substantial improvements to policing and the justice system. In the past few weeks, Moree has seen an additional two probationary constables (on top of the previous 11 in the last year), a Detective Sergeant to tackle rural crime, and the highly targeted Strike Force Claymore to tackle a concerning spike in violent thuggery.

I’ve secured a commitment from the NSW Government to completely rebuild the 24-hour Inverell Police Station, with $250,000 emergency funding for urgent repairs in the interim. The current station has not grown with the local police presence – police are battling overcrowding, limited facilities for female officers and insufficient space for prisoners. I personally took Deputy Premier John Barilaro and Troy Grant, Minister for Police and Emergency Services, through the facility – and they were both appalled at the current conditions.

It was also pleasing to see a successful outcome to my Judges for the Bush campaign – an attempt to secure a District Court Judge permanently based in our region to serve Moree, Armidale and Tamworth District Courts and negate the need for ‘fly-in, fly-out’ style justice, with judges flying up from Sydney to preside in our courts. I have welcomed former Lismore-based Crown Prosecutor

Jeffrey McLennon to the region as our first Judge based here. Speaking of the bench, it was also good to recently catch up with Magistrate Michael Dakin, who will from January take over the Inverell, Moree, Warialda, Boggabilla and Mungindi Local Court circuit. His appointment and permanent move to the Northern Tablelands will be crucial, especially in the Moree area.

These infrastructure upgrades are important to ensure our communities can grow – but perhaps the most important investments of 2017 have been made in the Northern Tablelands’ residents.

We all know that early childhood education is essential to children’s intellectual development – and I’ve secured more than $1.3 million to ensure greater access to preschools across the region. This will create 56 more positions five days a week, giving a further 280 kids the best head start in life.

Armidale’s title as a leader in innovative education has been secured with the $65 million Future School redevelopment – while still on the drawing board, it’s clear the campus will transform learning in the city. Funded in this year’s budget, the project is in an extended planning stage. This will ensure that parents and students, current and future, will have a chance to guide the development. This investment is unprecedented in regional NSW – and will ensure the school is second-to-none in teaching delivery and campus facilities. This investment is an incredible show of faith in our public school system – one I’m proud to see come to our region and nowhere else in country NSW.

New technology has helped smaller regional schools stay competitive, providing quality education as children move through their schooling. The $46 million Connecting Country Schools program has begun to roll out, with North Star and Croppa Creek public schools two of the first in NSW to benefit from enhanced connectivity and more reliable internet.

TAFE NSW is also delivering learning on the cutting edge with Connected Learning Centres (CLC’s) expanding course variety through online education and virtual reality technology. Glen Innes CLC has opened its doors – with early enrolments showing a surge of interest. These centres are supported by TAFE Digital, which is in the final stages of relocating to Armidale. This cutting edge facility is the hub of a revitalised TAFE and will bring 50 new jobs with it.

The NSW Government has been working hard to reduce costs for essential services – cutting costly fees and ensuring retailers stay honest. My successful campaign to reduce CTP premiums has saved Northern Tablelands drivers over $100 on green slip costs, with our local taxi operators saving thousands. Stamp duty exemptions will help young people save for a new home in our region, with affordable housing now closer than ever.

To simplify these transactions, the NSW Government has been rolling out Service NSW centres across the Northern Tablelands. 2017 has seen the highly anticipated opening of a Service NSW Centre in Inverell, with funding secured to open a branch in Glen Innes and Moree within the coming months. With 900 state government services at your fingertips, there’s now no need to spend hours on hold to a call centre.

For the region’s older residents, we’ve invested a further $100 million in palliative care to boost staffing numbers, improve access to medication, and encourage carers to move to regional areas. Community care providers have also seen direct investment to improve their service delivery and the comfort of elderly clients. Inverell’s Housing Support Program has seen $30,000 to rebuild a courtyard, with $31,700 funding for Moree Aged & Disability Services to improve parking facilities.

You and I know the Northern Tablelands is an incredible place to work, live and invest – and it seems like the rest of NSW is quickly catching on. Statistics released this year have shown that from 2011 to the 2016 census, our region has grown by 2% – an increase of 1,572 residents. The Armidale Region has streaked ahead with 3.3% growth over the 5 year period, with Inverell attracting 408 newcomers for a growth rate of 2.5%. The greatest turn around was seen by the Gwydir Shire: the rural-based LGA grew by 6%, welcoming another 293 residents.

With such strong momentum around the region, there’s a sense of optimism within the business community – driving local investment and job creation. In 2017 we have seen substantial job creation by major local employers, underpinned by substantial NSW Government investment. Armidale’s Uniplan will soon employ a further 40 staff members, with Inverell’s Boss Engineering to take on another 49 employees.

The surging renewables industry has brought a newfound wealth to our region – as Moree, Glen Innes and Inverell see a surge of activity on large-scale wind and solar developments. White Rock Wind Farm is nearly complete, with Sapphire Wind farm following shortly behind. These major projects have reaffirmed the Northern Tableland’s enviable position as a renewables hub – and will prove an excellent selling point for future investment. This is an industry I have passionately supported since my first meetings with prophets four years ago and I am very proud to see these developments proceed.

I’m very excited at the progress that we’ve seen in 2017, but we cannot stop there. Next year will bring new challenges, opportunities and developments, and I will continue representing our region to ensure we get our fair share.

The Northern Tablelands has all the attributes a regional area needs to thrive – a strong and well-supported agricultural sector, strong productivity in our towns and cities, avenues for sustainable growth and passionate and resilient communities.

I wish you all a Merry Christmas and a happy New Year – and look forward to the challenges 2018 will bring.