I had intended to make a presentation on Thursday morning at the public meeting in Guyra for the proposed merger of Guyra Shire and Armidale Dumaresq Councils but due to my responsibilities as the deputy chair of the ICAC parliamentary committee, I was in Sydney and unable to attend. I was however able to address the afternoon session in Armidale.

I have been very vocal in my opposition to this amalgamation which isn’t founded on a pre-conceived ‘anti-reform’ belief, quite the contrary – there’s no doubt things must change if local government is to be strong in country areas – but in my opinion the proposed merger simply doesn’t stack up, no matter which way you look at it.

The purported financial savings, which underpin the proposal, have been shown to be wildly inaccurate on every measure, using out of date financial figures, assumptions which aren’t relevant to either council and it’s missing some key data. Also, both Guyra Shire and Armidale Dumaresq Councils agree that the proposal won’t strengthen or provide any substantial savings above the current shared services and administration model.

This model, which has already realised considerable savings, is ignored in the proposal document, as are the benefits of increased purchasing power and efficiencies from the newly formed New England Group of Councils (NEGoC), rather than just a flat merger model. You don’t necessarily need a merger to achieve the same scale and capacity, just strong relationships and good co-operation across the region and given my experience at Gunnedah and with Namoi Councils, I know it can and does work.

I said right from the start of this process that I’d back my community – as a local MP that’s what a try to do on every issue – and the community is telling me they want no part of this merger proposal.

Businesses, councils and not-for-profits in the Northern Tablelands have until 1 March to apply for a share of $10 million in funding through the second round of the Murray Darling Basin Regional Economic Diversification Program (MDBREDP). This fund will give business in the region a chance to get a head start and strengthen their presence in the local regional economy.

Applications need to focus on new projects, business expansion opportunities, business establishment or infrastructure development to be eligible. Local councils and not-for-profit organisations can also still apply for the first round of the $4.1 million Energise Enterprise Fund which closes next Tuesday. For more information visit: www.industry.nsw.gov.au/murraydarlingfund

Motorists need to be award that changed traffic conditions will be in place next week for maintenance work on the bridge over Beardy Waters, about 10 kilometres north of Glen Innes on the New England Highway. The $60,000 bridge deck improvement work was funded by the NSW Government to ensure the bridge remained safe and accessible for road users. Work will be carried out from Monday, 15 February and take four weeks to complete, weather permitting. 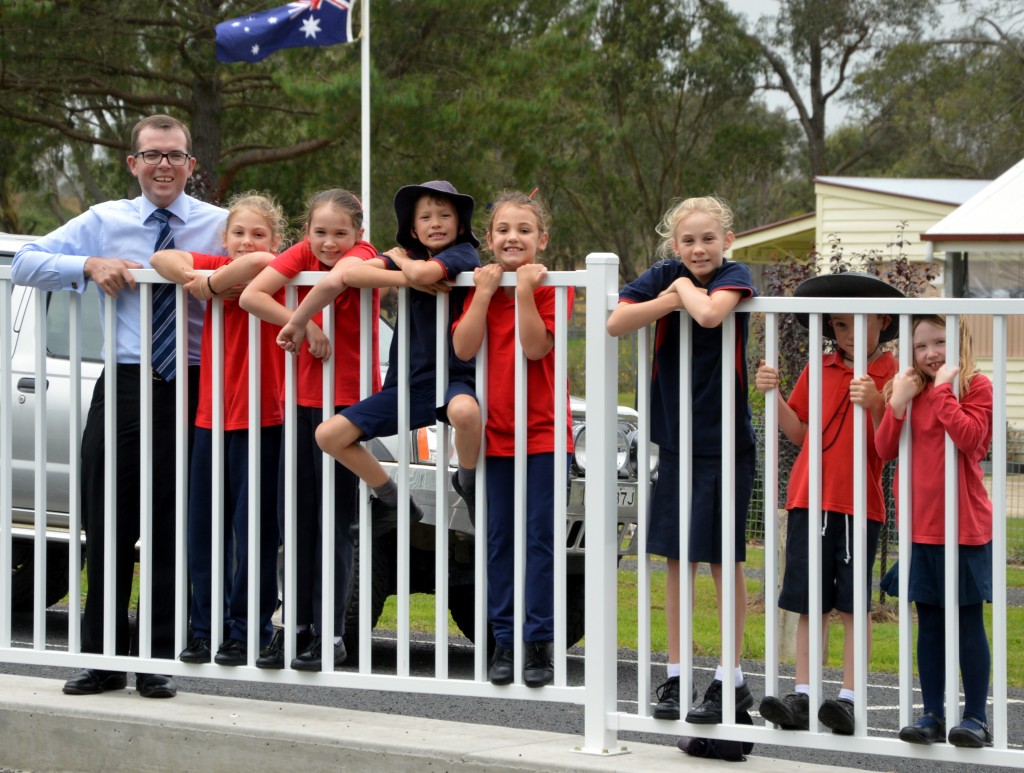 I had the pleasure of visiting Ebor Public School on Tuesday to meet with the students and staff and inspect the new $45,400 ‘kiss and drop’ zone and parking area in front of the school which was built to improve safety for the school community.

The new area includes six new short term parking bays and two long term parking bays where drivers can safely stop. A concrete median and fencing has also been built to separate the drop off zone from through traffic on Waterfall Way. The feedback at the school from parents, staff and students was very positive. They love the changes that have been made and the extra safety now provided

Earlier in the week, I joined Armidale Hospital staff and community members at a morning tea at the Armidale Rural Referral Hospital to ‘farewell’ the old buildings that will be demolished as part of the $60 million redevelopment of Armidale Hospital.

I was also able to confirm that a contract has been awarded to Sydney-based A W Edwards Pty Ltd – an Australian family-owned company – to carry out the enabling works for the project. These works will include demolition and site clearance, realignment and upgrade of related infrastructure services as well as the earthworks needed for the construction of the new four-storey building.

I would like to encourage early career writers in the region to apply for the NSW Government’s 2016 Writer’s Fellowship. The $30,000 fellowship is open to professional writers of any age who are in the early stages of their career and will enable the recipient to undertake activities including research, mentorships, internships, courses and creating new works. Applications are now open and close at midnight on Monday, 14 March 2016. For more information including details on how to apply, visit www.arts.nsw.gov.au

Chance for region’s recreational fishers to reel in the funding

I would like to urge local anglers and fishing organisations to apply for a share in more than $15 million funding as part of the 2016 NSW Recreational Fishing Trust projects. This program is a great opportunity to get local fishing project afloat, improve facilities or increase fish stocks. Applications for funding are open until Monday 21 March For more information visit www.dpi.nsw.gov.au/fisheries/recreational/licence-fee/apply-for-funds

Northern Tablelands Aboriginal artists and arts organisations are invited to apply for NSW Government funding to support local projects that encourage people to explore and express their cultural identities. This funding will help individuals to build on their existing abilities and talents, and assist organisations in strengthening their skills and capacity.  The fund offers up to $5,000 for individual professional artists and up to $15,000 for organisations. The closing date for applications is 14 March 2016.  For more information and to apply, visit www.arts.nsw.gov.au

On Monday I was delighted to hand over the keys to the new $310,000 Mercedes Benz Class 2 fire pumper to Inverell Fire Station officer Mark Savage. This replaces a 16-year-old Isuzu truck and has the very latest equipment and technology to increase the capacity of local firefighters to deal with fires, accidents, chemical spills and other emergencies.

Oddly enough, no sooner than the new vehicle had been officially handed over, the pumper and crew were out responding to a call for a suspected fire in the Inverell Times building in Vivien Street. Fortunately, it was only an electrical fault.

I had the honour of attending the Glen Innes Fire Station’s 100th anniversary celebrations last weekend where the community had the opportunity to acknowledge the courage and dedication of firefighters who had served there over the last century.

A lot has changed in the fire service over the past 100 years and the 18 firefighters now stationed at Glen Innes have modern fire engines and the latest in equipment and technology to ensure the safety and protection of themselves and the local community. One thing that hasn’t changed is the courage and commitment shown by firefighters past and present

Local councils, tourism associations, industry and regional tourism organisations can now apply for the third round of the NSW Government’s 2015-2016 Regional Visitor Economy Fund (RVEF) contestable fund. This initiative allows eligible tourism businesses and organisations within our local community to showcase the diverse range of products and experiences our fantastic region has to offer.

Further information on the RVEF visit www.destinationnsw.com.au/rvef Applications for round three of the 2015-2016 RVEF contestable fund will be accepted up until 5pm on Friday, 11 March 2016.

Yesterday and the weekend

Yesterday I visited Martin’s Public School in Armidale to address a Leadership Assembly where the student leaders for 2016 were inducted and presented with their badges of office. I also dropped in on the Armidale Beef Jerky competition, which raised money for cancer research, then headed up to Glen Innes for the opening of the annual show.

Today I’ll be back at the Glen Innes Show in the morning and on Sunday I have a few meetings to attend in Uralla and then back to Armidale for the National Services Memorial Day service in Central Park.