I was delighted to visit the work site at the Armidale Rural Referral Hospital yesterday to witness the demolition of several buildings which will make way for a new four-storey structure. It’s a wonderful milestone for the Armidale community and one which has been long-anticipated.

The redevelopment will deliver a mix of new and redeveloped facilities, including the construction of a new four-storey building which will be directly linked to each floor of the existing three-storey main hospital building. There will be a new emergency department to receive patients from O’Dell Street, new in-patient ward, four new operating theatres, a central sterilising supplies department and a new and expanded critical care unit. 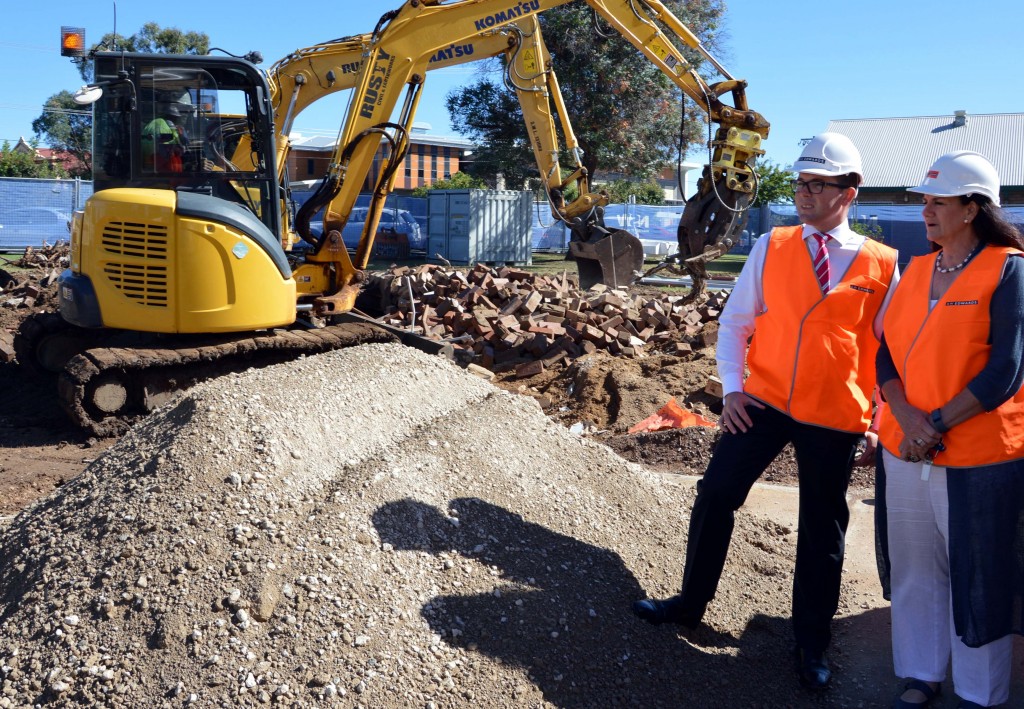 Northern Tablelands MP Adam Marshall and Acting Armidale Hospital Operations Manager Wendy Mulligan inspecting the enabling works which are currently underway to prepare the site for the main construction to begin in July on the $60 million Armidale Hospital redevelopment.

Combined with the new University of New England Tablelands Clinical School and the impressive Ambulatory Care and Chemotherapy building, the redevelopment of Armidale Hospital will see a world-class health precinct in our region which combines extensive quality clinical and community health services with impressive teaching and research facilities.

Pleasingly, 6,000 of the Armidale blue bricks in the old infectious diseases ward building will be preserved and used in the construction of the new main four-storey building – a wonderful way to blend the old with the new at the hospital.

Applause for the Inverell community

I’d like to thank those members of the Inverell community who attended Tuesday night’s public meeting to discuss the plans for the $30 million Inverell Hospital redevelopment. The purpose of the meeting was to keep Inverell and district residents up to date and involved in the planning process and it was gratifying to know the community was as equally interested in ensuring the once-in-a-generation redevelopment met their current and future health needs.

This was the first opportunity the community has had to receive information about progress on the redevelopment and to ask questions and provide feedback. We were able to allow more than half the meeting for the community to have their say and I was impressed by the considered questions, ideas and thoughts that came forward.

The planning so far has identified the scope of the redeveloped hospital, which includes:

I was happy to announce this week that work on the $7.8 million upgrade by the NSW Government of Nee Nee Creek Bridge on the Newell Highway, 46 kilometres north of Moree, is well underway. The existing bridge will be replaced with a new, stronger and higher structure which will meet the state’s current load and width standards.

The Armidale Neighbourhood Centre provides an important service to socially disadvantaged residents and now, courtesy of an $18,236 State Government grant, the premises in Rusden Street will receive a very welcome makeover.  The centre occupies part of an old council-owned building that was scheduled for demolition to make way for a new library, however with those plans now on hold, centre management decided to push ahead with a few renovations.

They are very keen to improve the physical surroundings of the centre to better support and care for the growing number of clients and community members using the space. Their interview rooms will be air-conditioned which will make things a lot more comfortable for their clientele and staff. The floorcoverings will also be replaced with linoleum and carpet; this will give the premises quite a lift creating a much more welcoming environment for everyone using the centre.

Fire protection and emergency response in Warialda has received a huge boost this week with the delivery of a new purpose built $310,000 fire truck to the Warialda Fire and Rescue Station. The new Mercedes Benz Class 2 fire pumper replaces the 15-year-old Isuzu truck. The pumper has the very latest equipment and technology to increase the capacity of local Fire & Rescue NSW firefighters to deal with fires, accidents, chemical spills and other emergencies.

It’s much faster than the old truck and has a much larger cabin than previous vehicles, providing a greater level of comfort and safety for firefighters. The rear of the truck has also been remounted and modified to provide more room for equipment. You won’t find better or a more modern fitted out firefighting vehicle anywhere else in Australia – these vehicles are the very best and what our firefighters deserve.”

This week I had the pleasure of meeting and congratulating Warialda High School student Jim Skinner and Guyra Central School student Hunter Davidson who have both won a Premier’s ANZAC Memorial Scholarship. They boys will travel to France in July and visit the official commemoration sites of the Battle of Pozières and the Battle of Fromelles. They will be joined by 24 other Year 10 and 11 scholarship winners from NSW.

To win this scholarship is an incredible achievement for Hunter and Jim. They are bright and hardworking students with a keen interest in Australian history, particularly our nation’s involvement in World War I. I congratulate them on securing these prestigious scholarships and wish them well on this exciting adventure.

Today (Saturday) I will be attending the Legacy Presidents lunch in Armidale and then on to the RFS New England Zone Medals presentation at TAS.

On Sunday I will head up to Guyra to attend the Guyra Community Garden First Birthday celebrations.