MEMBER for Northern Tablelands Adam Marshall has been named Minister for Agriculture and Minister for Western NSW in the new Berejiklian-Barilaro Cabinet.

In a statement release on Wednesday, Mr Marshall said he felt deeply honoured and privileged to be appointed.

“There are some obvious challenges confronting the sector right now, chief among them one of the worst droughts in living memory. This will be one of my first and key focus areas, along with addressing the issues of illegal trespass, invasion of privacy and protecting our farmers’ interests in planning processes. 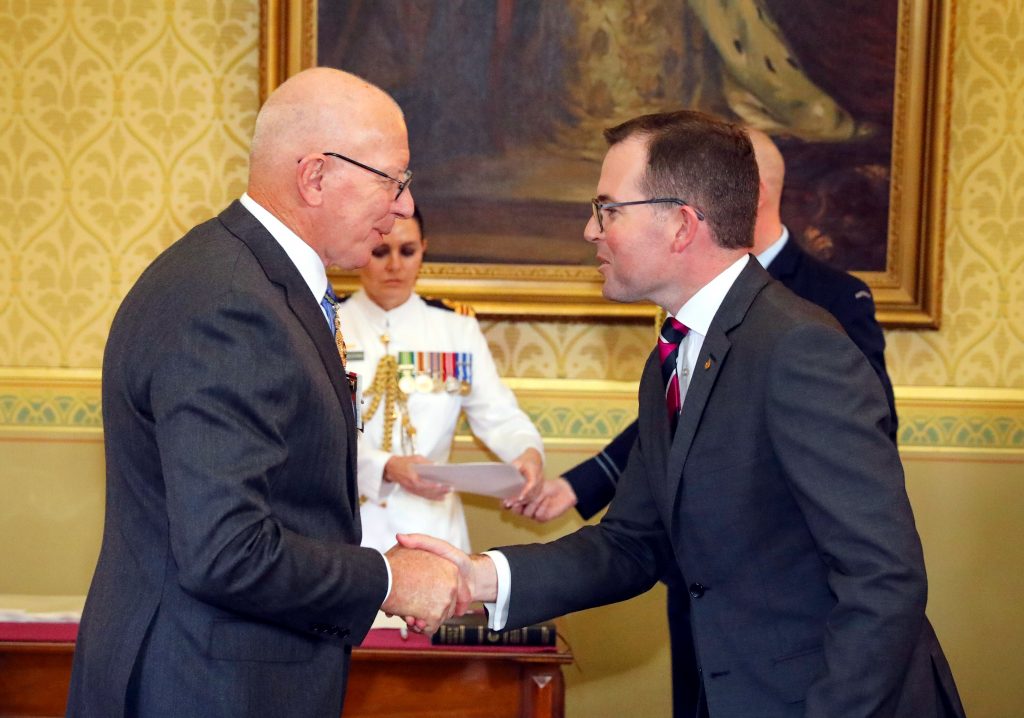 “Given the continued poor seasonal outlook across the State, I will be looking quickly at the suite of assistance programs for our farmers and farming communities. These need to respond to on farm and post farm gate help for our country communities.

“As someone who has lived and worked their entire life in western NSW, I’m looking forward putting our unique set of issues front and centre around the cabinet table,” Mr Marshall said.

“I cannot wait to get started with this work!

“Lastly, it would not be possible for me to be given this opportunity without the support of the people of the Northern Tablelands, as their representative in the State Parliament, and I want to reiterate my commitment to serving them and advocating for their needs first and foremost.

“It’s been quite a journey for this lad from the land at Curlewis, near Gunnedah, and I’m looking forward to the challenges and the opportunities ahead over the coming years,” he said.

NSW Farmers’ President, James Jackson, said Mr Marshall’s appointment came at a critical time for the agricultural industry and he looked forward to working closely with him and the Government in tackling important issues such as the drought.

“I congratulate Adam Marshall on his appointment as Minister for Agriculture and Western New South Wales in the Berejiklian Government.  As a representative of a regional community with a significant agricultural footprint, we hope that Adam can utilise his local knowledge to continue strengthening the agricultural sector in New South Wales,” Mr Jackson said.

He said NSW Farmers also welcomes the appointment of Michael Johnsen as Parliamentary Secretary for Agriculture.

“We also welcome the appointment of Melinda Pavey as Minister for Water, and Matt Kean as the Minister for Energy and Environment.  These three portfolios have enormous significance for the agricultural sector and we will work closely with them, and all ministers in the government, to deliver NSW Farmers’ FOCUS agenda during the forthcoming parliamentary term,” he said.

“I want to acknowledge, in particular, the Premier’s decision to appoint a dedicated Minister for Western New South Wales in her new ministry.  This was one of NSW Farmers’ 15 priority asks going into the election and is recognition of the importance of New South Wales not simply standing for Newcastle, Sydney and Wollongong.

“Regional New South Wales sent a clear message to Macquarie Street at the last election. As the representative voice for agriculture across this state, NSW Farmers will work with all political parties elected at last weekend’s election to ensure the commitments made during the campaign are delivered in full.

“The drought, water management, protecting the Right to Farm and ensuring New South Wales’ place as a producer of high quality and safe agricultural produce are important issues facing the sector at present.  There is no time to wait – the new Government has a mandate to hit the ground running and we will be working with them to ensure the best interests of agriculture are maintained,” Mr Jackson said.