The NSW Government on Thursday announced $7.3 million in funding for a strategic research project which would allow the State’s beef producers to, for the first time, measure genetic value across different cattle breeds.

Minister for Agriculture Adam Marshall made the announcement at the University of New England today and said the project would develop a ‘universal language’ for producers to compare and then select the best traits between Angus, Herefords, Shorthorns, Wagyus, Charolais and Brahman cattle. 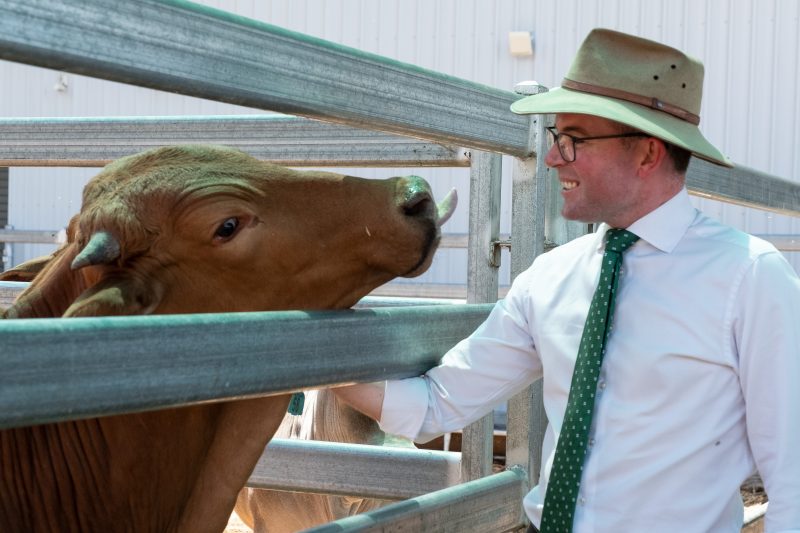 Minister for Agriculture Adam Marshall got up close and personal with some of the Brahman cattle at the University of New England during the $7.3 million beef genetics research project announcement.

“The research will underpin the development of multi-breed BREEDPLAN Estimated Breeding Values (EBVs) in Australia for our six most common types of cattle.

“The research project is expected to deliver timely information to breeders enabling them to make more informed decisions to maximise the efficiency of their herds and boost productivity.

“The NSW Government has worked closely with industry to identify this opportunity for advancement.

“Our producers already breed the best bulls, but this means we can make them even better, both in individual herds and the industry as a whole.”

Mr Marshall said the research herd would consist of 2000 animals and their offspring across the six breeds, providing a comprehensive cross-section of cattle genes in the country.

“Over the next five years more than 8,000 calves will be born, which means we can effectively collect data for traits that impact profitability and contribute to the national aim of doubling the rate of genetic gain in beef cattle,” Mr Marshall said.

“The project is being run from six NSW Department of Primary Industries research stations across the state, which will allow data to be collected from a variety of conditions, from cool climates to the sub-tropics.”

The project is jointly funded by the NSW Government through the NSW Department of Primary Industries (DPI), the University of New England, the Commonwealth Government and Meat and Livestock Australia.