MEMBER for Tamworth Kevin Anderson has welcomed the $44.7 million NSW Koala Strategy package and said it will be a valuable addition to work with investment already undertaken in the Gunnedah region.

“It is fantastic to see such strong and vital investment for koalas which will go a long way in ensuring Gunnedah will continue to maintain its place as the Koala Capital of the World,” Mr Anderson said.

“Over a long period of time, much has been invested around Gunnedah by both Government and volunteers in supporting our koala population. Back in May 2012, then Environment Minister Tony Burke announced $100,000 for a highly successful monitoring project run by the Liverpool Plains Land Management group. 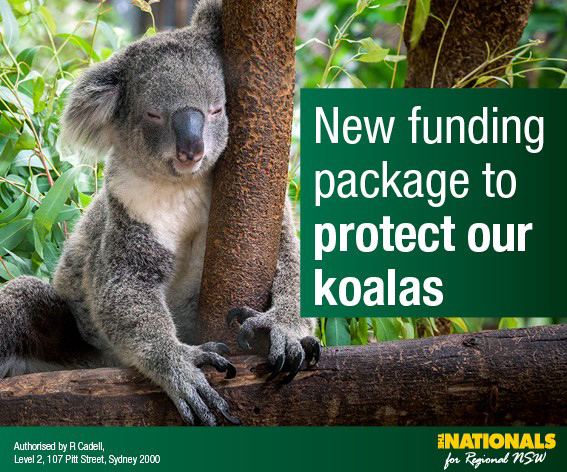 “The new Koala Habitat Restoration project is funded by the NSW Government’s $100 million Saving our Species (SoS) program and will increase and maintain important koala habitat. “The benefits of the project are not restricted to koalas, as the native trees planted will help support other local flora and fauna.

“Over the next three years, more than 9,500 new koala food and shelter trees will be planted in corridors to extend and link existing koala habitat. These habitats and to drinking water is of particular importance in extremely dry times.

“Last year the NSW Government announced $10 million from the NSW Environmental Trust which was the start of the total strategy announcement to purchase high priority koala habitat over five years, ensuring koalas are safeguarded for future generations.

“A key pillar of the NSW Koala Strategy is investing in new reserves for koalas and conserving koala habitat. More than 24,000 hectares of land will be managed for koala conservation.

To stabilise koala numbers across the state, the NSW Koala Strategy will include:

In March 2016 the NSW Government asked the Chief Scientist & Engineer to conduct an independent review into the decline of NSW koalas. This led to a report which recommended a whole-of-government koala strategy for NSW.

“I am pleased the Government recognises the importance of preserving our koalas and please be assured I will continue to work hard to ensure that Gunnedah remains the Koala Capital of the World”, Mr Anderson concluded.

Next post
This one’s for Bernie: Moree Boars chase their field of dreams