BINGARA’S Showground Trust is looking forward to getting on with the job of constructing a new horse stable block after receiving a $12,000 grant from the NSW Government’s Public Reserves Management Fund (PRMF), Northern Tablelands MP Adam Marshall announced today.

Mr Marshall was in Bingara last week and met with Trust members to deliver the good news.

Mr Marshall said he was pleased the region was able to secure more than $400,000 in this round of the PRMF, which was aimed at the development, maintenance and improvement of NSW Crown Land reserves. 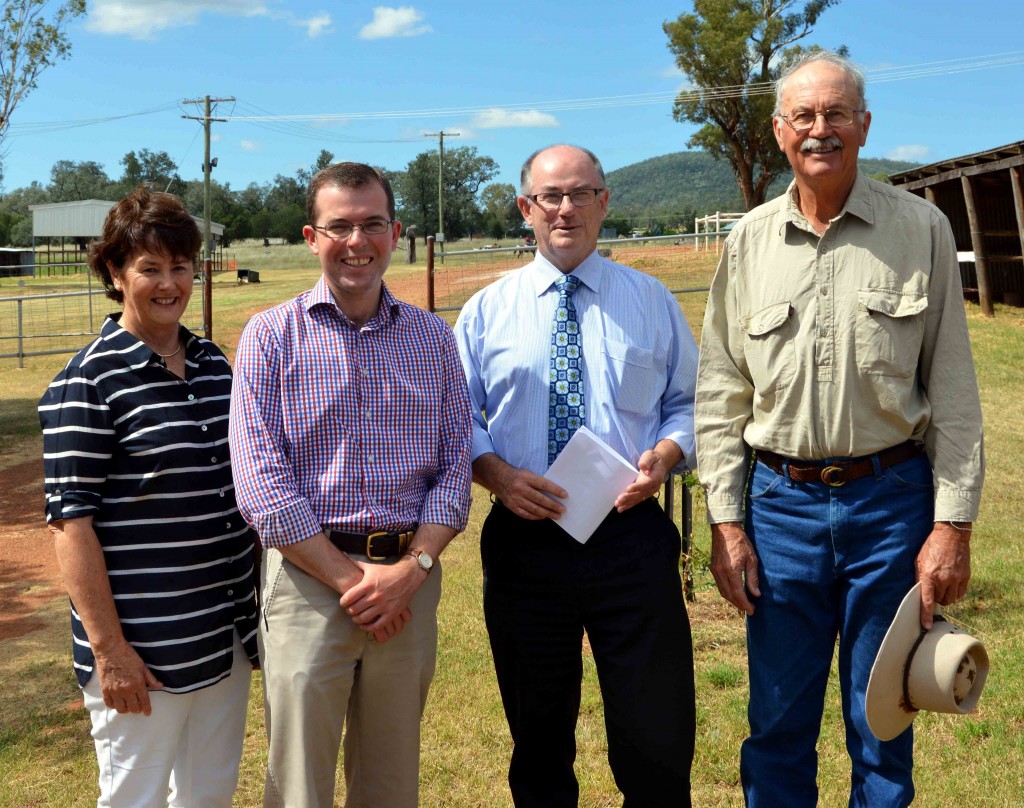 “Construction of a new stable block has become a priority for the Trust as it runs short on stables during busy events and wants to have scope to host larger equine activities.

“I was happy to support their application as they are very hard working committee and very determined to continue improving the facilities at the showground.”

Last year the Trust was successful in obtaining $13,000 from a supplementary round of the PRMF to replace a section of the old ring fencing at the grounds.

“The new fencing looks terrific and is a real credit to the Trust, which used the funding to purchase the materials and a great deal of in-kind support to finish the job,” Mr Marshall said.

“We’re pleased now to be able to get on with this job; once we get the quotes sorted our volunteers will get started,” Cr Coulton said.

“Not only do we have times when we require more stables, but some of our existing ones aren’t up to the standard we would like so this new block will be a huge boost for the grounds and our ability to host more and larger horse events here.”

“I am delighted this funding is coming Bingara’s way, which will continue to support improvements to this great little showground,” he said.

“Showgrounds are wonderful assets valued by the local community and their ongoing success is vital to local sports and activities, business and tourism in regional towns – this is particularly true of Bingara.”

Meanwhile, Adam Marshall has welcomed an announcement by Premier Mike Baird and Minister for Ageing John Ajaka over the weekend that the NSW Government will extend its commitment to fund concessions for the state’s seniors which were cut in the Federal Government’s budget.

The Commonwealth terminated the concessions agreement in its Budget last year. In response the NSW Government decided to cover the shortfall of $107 million for 12 months.

Mr Marshall said the state government would extend this support by a further three years if re-elected – a $343 million commitment.

“This is fantastic news for the more than 18,000 over 60s in the Northern Tablelands who benefit from various concessions and assistance,” Mr Marshall said

“I understand the cost of living pressures our seniors face and made direct representations last year to the Premier and Minister asking that we not leave them in the lurch.

“My requests and those of colleagues were well received and the government is determined to ensure seniors and pensioners are not adversely affected by the Federal Government’s harsh cuts.”

Mr Marshall said that with the state’s budget now under control and finances strong, the government was in a position to extend the vital support.

He said that that NSW Government’s continued funding of pensioner concessions would allow seniors and pensioners to benefit from discounted public transport fares, cheaper energy and water bills, council rates and vehicle regisration.

“A key commitment of the government is protecting vulnerable members of our community, such as pensioners and seniors on fixed incomes, who would have been affected by these cuts,” Mr Marshall said.

“Seniors and pensioners across the electorate have been contacting me asking if the support they receive would continue so I’m delighted with the Premier’s pledge to extend this support for pensioners and seniors for a further three years.”

Mr Marshall said he and the NSW Government remained strongly opposed to the Commonwealth’s termination of the National Partnership concessions agreement, which has been in place since 1993.

”We will continue to fight Canberra’s cuts and are calling on Tony Abbott and Joe Hockey to reinstate this modest contribution which goes a long way to help our pensioners and seniors,” he said.

“The government will maintain negotiations with the Commonwealth, to ensure fair concessions are secured well into the future.”